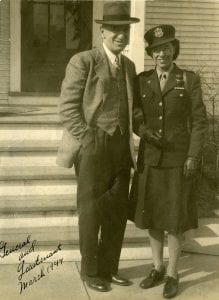 Rhonda Ziesler and her WWI-era veteran father, seen. Her dad added the caption and fancifully promoted himself to general. 1944

Military service ripples in families beyond an individual servicemember. Often over the past 150 years, it is not uncommon to have a parent serve followed by a child emulating their example. Sometimes this legacy of service extends into grandchildren and great-grandchildren. Just as some families run a commercial enterprise over generations, for others the “family business” is the U.S. military.

Among Wisconsin military families, three stand out above all others – the Kings, MacArthurs, and McCoys. Together they represent centuries of service in the Wisconsin National Guard and U.S. Army. Two of these families have given their names to places in the state, specifically the Wisconsin Veterans Home at King and the U.S. Army’s Fort McCoy near Sparta.

In the Driftless Area, one of the most prominent multi-generational military families is the Twinings. Captain Nathan C. Twining served in the 40th Wisconsin Infantry during the Civil War. His nephew and namesake had a prominent career in the U.S. Navy during the 1914 Vera Cruz expedition and in World War I. One of his grandsons, Nathan F. Twining, commanded Thirteenth and Fifteenth Air Forces in World War II, later becoming Air Force Chief of Staff and ultimately Chairman of the Joint Chiefs of Staff. Nathan F.’s brother Robert served on his staff in World War II, while another brother Merrill was with the 1st Marine Division on Guadalcanal and later rose to the rank of lieutenant general in the Marine Corps. Merrill Twining designed the 1st Marine Division’s patch in 1943.

These high-ranking families are by no means the only ones in Wisconsin with a tradition of military service. Baraboo’s DuCharme family sent members to World War II, Korea, and the Cold War. Donald fought with the Army 94th Infantry Division in France and Germany, while his brother Dean deployed to Korea as a flight radio operator in the air force. Donald’s son Craig was a Draftsman 2d Class (DM2) in the Navy from 1983 to 1989 aboard USS America and other ships.

Another multi-generational service family was the Beffels of Milwaukee. John was a doctor in the U.S. Army’s 22d Base Hospital during World War I, serving in France. His daughter Eulalie followed his example in World War II, joining the army in 1942 and being posted to a logistics headquarters in Italy and later the French Riviera. 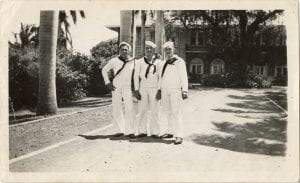 Siblings also served. For Wisconsinites in World War II, New London’s three Barber brothers – Leroy, Malcolm, and Randolph – were the Badger State’s equivalent of the five Sullivan brothers. The three Barbers all served together aboard the battleship USS Oklahoma, which capsized during the attack on Pearl Harbor. All three died in the attack and are buried in Honolulu. A fourth brother, Clayton, served in the U.S. Navy during World War II.

The largest single group of siblings in our collection are from the Keiler family of Green Bay, who sent six brothers to World War II. John was a Marine killed in the defense of the Philippines, while his brother Wieck joined the Army and helped liberate the islands in 1945. Joseph and Robert served with the army in France, the latter parachuting in as part of Operation DRAGOON in 1944. James and Martin served in the navy in the Pacific. A nephew, Ronald, joined the navy after the war and was lost aboard the submarine Thresher in 1963.

There is only space here to give the briefest survey of this topic. To explore these stories, or other families in our collection, please click this link: Wisconsin Veterans Museum Online Collections

Your ticket for the: Generations of Service