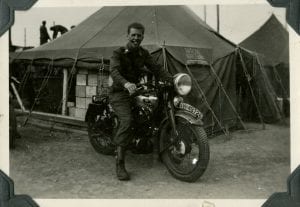 While May 8, 1945 marked the end of World War II in Europe, it also marked the beginning of an extensive period of reconstruction across the war-torn continent. The period immediately following Germany’s surrender was fittingly dubbed “Stunde Null” —Zero Hour— by those whose decimated homeland faced total political and economic restructuring. For many American troops, including John D. Winner of Madison, Wisconsin, it also meant assuming a new role within an army of occupation while the Allied nations grappled with how to move forward in the war’s aftermath.

Lieutenant Winner arrived in France a few months ahead of V-E day in January 1945. He had been assigned to the 3rd Infantry Regiment the previous year after completing Officer Candidate School (OCS), and trained at Camp Butner, North Carolina and Fort Benning, Georgia before sailing overseas. Winner spent his first months in Europe in various field training exercises before being sent to the towns of Dietersheim and Rüdesheim in Central Germany that May. Just days before the German surrender his unit was informed they would be responsible for establishing a new a Prisoner of War Temporary Enclosure (PWTE) in the region, with only one week to prepare before receiving their first prisoners.

As the camp’s new supply officer, Winner was in charge of acquiring food for those held at the PWTE, requiring him to work with local bakeries and other merchants to try to secure sufficient supplies. In his 1995 oral history interview Winner described the logistical difficulties in adequately caring for the prisoners, stating “Well, they were a sad lot then…we just had a hard time feeding them. We didn’t have enough tents. They were in the open just like they’d be in combat. If they had a shelter half fine, if they didn’t they’d be subject to the elements.” The PWTE’s first 10,000 prisoners arrived by train ahead of schedule. Within a week, that number had multiplied to 100,000. 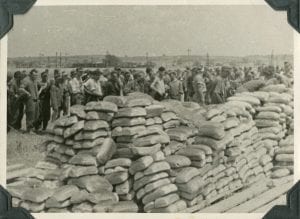 Following Germany’s surrender, the camp shifted to processing the prisoners, separating possible war criminals and Schutzstaffel (SS) and releasing those who were draftees to be sent home. Winner remained at this first camp until June, at which point he was reassigned to start a new camp 120 miles west in in the city of Darmstadt. This camp was smaller, populated with 20,000 prisoners who were segregated for various reasons and could not be immediately sent home. In January 1946 Winner moved yet again when he was appointed Camp Commander at a site of 4,000 SS troops in Kornwestheim. From there, the 3rd Infantry went to Berlin, where Winner describes them as show troops who participated in parades with the Russians and the British while also policing the region.

Winner remained in Germany until June 1946. His success at his assignments had earned him a Bronze Star Medal in addition to clearly gaining him the respect of his prisoners. He returned home with numerous handmade gifts from those held at the camps, including a variety of artwork featuring Winner. Upon his return stateside, Winner entered the US Army Reserve, and in 1948 became a Plans and Training Officer for the Wisconsin National Guard while simultaneously attending law school at the University of Wisconsin. In 1959, he was offered the position of Judge Advocate General (JAG) for the 32nd Infantry Division after recently serving as District Attorney for Dane County and as Deputy Attorney General for the state of Wisconsin. Winner returned to active duty during the Berlin Crisis in 1961, then retired from the Army as a Lieutenant Colonel in 1962. He retired from his law career in 1996 and passed away in Madison in 2007.

You can learn more about Winner’s experiences at the end of World War II in his own words in his 1995 interview: https://wisvetsmuseum.com/wp-content/uploads/2017/03/WinnerJohn-_OH219.pdf

Your ticket for the: Lieutenant John D. Winner