Marcia Gates: Angel of Bataan in the Lost Battalion

The fall of the Philippines in 1942 left a deep scar on the lives of many Wisconsinites. In honor of International Nurses Day, we remember the nurses from our state who became prisoners of war following the 1942 fall of Bataan and capture of Corregidor. One especially tenacious servicemember who survived the experience was United States Army nurse and ‘Angel of Bataan’, Marcia P. Gates.

Gates was born in 1915 and grew up with three sisters in Cambridge, Wisconsin. After high school, she earned a degree from the Milwaukee School of Nursing and worked at two area hospitals. Eventually, Gates’ adventurous nature brought her to a recruiting office. She joined the U.S. Army Nursing Corps in February 1941.

Gates’ first assignment was at Fort Sheridan, Illinois. She thrived there, making close friends and building a rapport with Lieutenant Phillip Hartman. Gates spent a contented spring and summer at the fort before receiving orders to the Philippines in autumn 1941. On the way to her new assignment, Gates made stops at San Francisco and Hawaii. According to Gates’ account, she and fellow nurse Alice “gave Sheridan a good name” with their work and enjoyed “popularity galore” at dances and dinners. Gates documented it all through letters to family and friends.

Gates arrived on the island of Luzon in November 1941 and began work at Fort McKinley’s hospital, just three miles from Manila. The post was the main installation for the join Filipino and American forces, formally known as U.S. Army Forces in the Far East (USAFFE). In letters home, Gates describes Luzon’s idyllic coast as perfect for off-duty excursions and social engagements. For Gates and her fellow nurses, carefree days amid the island’s blooming orchids would not last.

The winter of 1941 brought Japanese attacks across the Pacific. Pearl Harbor was devastated by the now-infamous bombing on December 7. Japan’s forces soon began to advance on the Philippines. Prewar planners had established War Plan Orange-3, a series of moves for withdrawing to the Bataan Peninsula and Corregidor Island. On Christmas Eve, USAFFE Commander General MacArthur ordered the plan be put into effect. Filamerican forces then retreated to Bataan. Due to miscommunications and a tight timetable, they brought far less supplies than needed. These would dwindle further as the retreat continued. 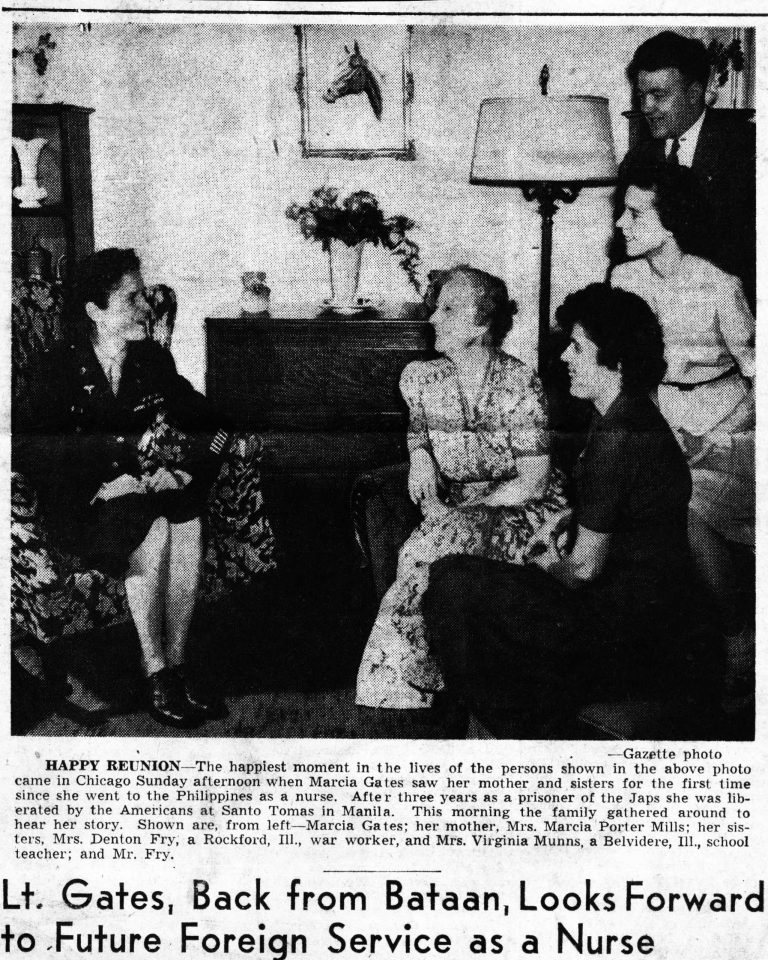 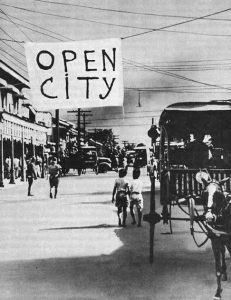 Manila was declared an open city on December 26, 1941, to protect the civilian population. (Source: U.S. Army Center for Military History)

Some American nurses were evacuated by plane to Australia, but Gates was not so lucky. She retreated across Manila Bay to Little Baguio in the Bataan jungle. Soon, Gates resumed her duties at a makeshift hospital in old Philippine Scout barracks. Twenty-three American and 5 Filipino nurses served at this location, known as Hospital 1. In a letter, Gates describes inadvertent shelling of the hospital and difficult sanitation conditions. She recalls Japanese and American forces launching artillery back and forth overhead, between Bataan and Corregidor.

Japanese forces grew nearer, forcing an evacuation of Hospital 1 in April 1942. Gates, her fellow nurses, and one surgeon spent a tense night and morning as Bataan fell, waiting on a Mariveles dock for their boat to arrive. As they finally crossed to Corregidor Island, Japanese forces unsuccessfully bombed and strafed the group’s small craft.

The barrage of Japanese artillery on Corregidor was overwhelming. For the safety of patients and medical staff, a hospital was established in the bomb-proof Malinta Tunnels. Theses dank and overcrowded storages were never meant to house patients, but medical staff managed to adapt. Gates’ hope for imminent rescue did not falter, even as Lieutenant General Jonathan Wainwright surrendered to the Japanese on May 6, 1942.

Fifty-six nurses and 50 doctors were captured initially by the Japanese army at Corregidor. Some were allowed to leave with the Red Cross, and others were captured during covert escape attempts. Gates was one of the 68 nurses nicknamed The Lost Battalion, who remained prisoners of war. The nurses stayed at Malinta Tunnel Hospital until July 1942.  They were transported to a cramped girl’s school called Santa Catalina, then to Santo Tomas University internment camp near Manila.

Separated from their service member patients on Corregidor, Gates and the other nurses were now tasked with treating civilians—fellow internees at Santo Tomas Internment Camp. The approximately 3,500 prisoners were American, British, and Dutch civilians captured at the fall of Manila. Overcrowding and cleanliness issues were difficult to address, especially in the hospital. The prisoners lived under civilian Japanese supervision and were sustained with basic rations. Shortly after arriving at Santo Tomas, Gates was diagnosed with breast cancer. Despite the heightened risks of such an invasive procedure, Gates underwent a mastectomy at the camp.

At home, Gates’ mother waited anxiously to see her name among POW nurses trickling out of the Philippines via Red Cross flights. Gates had been officially missing for a year and a half before her POW status was confirmed to the family. Now, they faced a similar period of silence. Mrs. Gates was fortified by letters written before the fall of Bataan, recovered and forwarded to her in 1943. Like her daughter, Mrs. Gates refused to give up hope. She saved up money to buy a small lakeside cottage and furnished it for her daughter’s return.

For the first two years of Gates’ imprisonment, internees were still allowed limited freedoms like the purchase of local food and some recreational activities. Gates later recalled the scarcity of cigarettes, and ritual of sharing one among as many prisoners as possible. In spring 1944, conditions at the Santo Tomas Internment Camp declined sharply. In reaction to advancing Allied Forces, the Japanese military took control of the camp. Gates saw these small privileges stripped away and rations reduced to thin gruel. Sanitation deteriorated as the prisoner population was overtaken by dengue fever, dysentery, beriberi, and malaria.

In mid-February, Gates began her journey home. The next major stop was Leyte, where a bronze star and promotion awaited her. After medical treatment in the States, the Santo Tomas nurses were given a free stay at any American resort and sixty days leave with their families. Gates was open about her experiences as a prisoner of war during this time, giving multiple interviews with local newspapers. She participated in a radio show called “Those Who Serve,” vividly recalling her three years of internment. When the show’s audience inquired about revenge on the Japanese, Gates spoke only of ending the war.

Throughout the summer of 1945, Gates retreated to the cabin in Lake Ripley, Wisconsin. She requested another deployment to the South Pacific and later was discharged due to her health and the war’s end in September 1945. As a veteran, Gates worked to restore a sense of normalcy and momentum in her life. The month after V-J Day, she married Army Reserve officer Phillip Hartman, who she met at Fort Sheridan four years prior. She became the first woman to join the James Munro American Legion post in Cambridge, Wisconsin, and continued her nursing career.

After weeks of near starvation at the camp, American forces finally pushed to Manila. On the night of February 3, 1945, Gates recalls her countrymen approaching the Santo Tomas fence. Through the joy and tumult of liberation, she recognized a former Filipino patient among her rescuers. With freedom came an overwhelming 12,000 letters and visit from General MacArthur. At long last, news of Gates’ freedom reached her mother on February 6, 1945.

Gates and Hartman separated after two years. She relocated to California and Colorado, then took a civilian Air Force nursing post in Japan. Despite her dark memories of Santo Tomas, Gates enjoyed working at the Japanese hospital. She continued to yearn for adventure, and privately struggled with symptoms of post-traumatic stress disorder. Gates remained a nurse and medical technician for her whole working life, eventually returning to Wisconsin in 1954. In 1969, the cancer Gates fought as a prisoner of war returned. She informed only close family and doctors of her condition. Gates passed away in a Madison hospital on June 25, 1970. 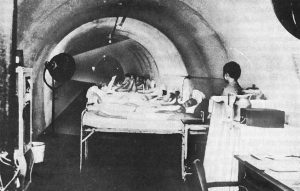 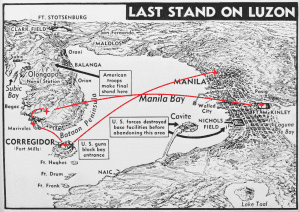 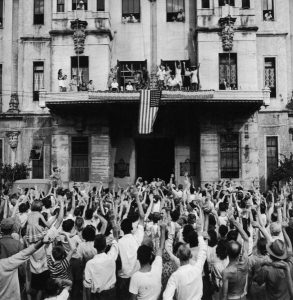 Your ticket for the: Marcia Gates: Angel of Bataan in the Lost Battalion

Marcia Gates: Angel of Bataan in the Lost Battalion