Reflecting on PTSD: Experiences and Recovery 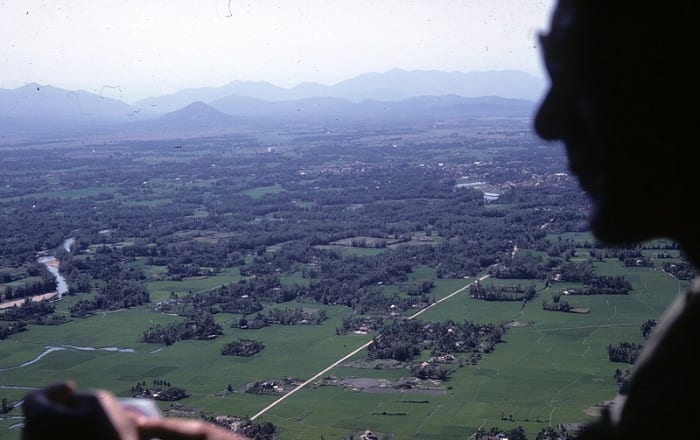 “It’s been a very hard journey, and that’s why I like sharing it with people, so that they can realize what it’s really like for some people. Granted, some soldiers don’t go through PTSD, so they’re fine, and there’s no story to tell there. But I definitely had a lot of struggles with that.” – Laura Naylor (WVM OH1417 and WVM.1586.I101)

Military veterans and service members are uniquely at risk of experiencing or witnessing traumatic events. Whether a veteran served in a conflict or in peacetime, overseas, or at home, the effects of trauma can persist long after an inciting event. Mental health professionals sometimes identify these symptoms as post-traumatic stress disorder (PTSD).

PTSD symptoms like nervousness, upsetting memories, trouble sleeping, or intrusive thoughts can impact the lives of veterans and their loved ones. The condition can also intensify related health issues, including depression, anxiety, and substance addiction.

Recording veterans' experiences with and discussing PTSD occasionally becomes part of the oral history interview conducted by the Wisconsin Veterans Museum. Below are six short audio clips, each containing oral history accounts of combat-related stress and PTSD from the First World War to the present.

As part of PTSD Awareness Month, we also encourage you to explore WAR:RAW, our online exhibit featuring stories of trauma recovery through art. We appreciate the bravery of the narrators in sharing their experiences.

CONTENT WARNING: These stories contain accounts of war, violence, mental health crises, and references to substance use. This content may be troubling to some listeners.

PTSD is treatable through counseling, medical solutions, and other therapies. For further information about PTSD, visit the US Department of Veterans Affairs’ National Center for PTSD. To learn about mental health treatment options, visit the Guide to Mental Health Services for Veterans and Families. 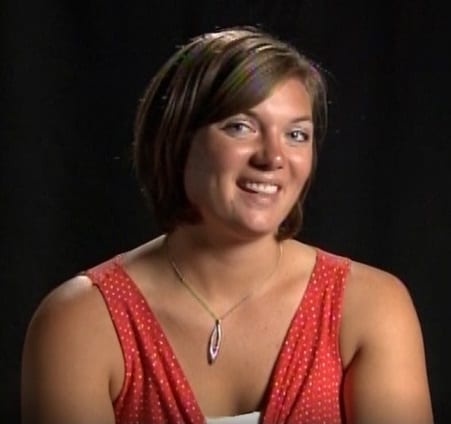 LAURA NAYLOR: I just broke down. I had a panic attack while I was at Sergeant’s School, because of what happened in Iraq, and this is the first time I really had symptoms of post-traumatic stress disorder, was while I was at AIT. Well, I ended up finishing AIT and continued on in the military—I’m sorry, not AIT, Sergeant’s School, and continued on in the military, and I was still having breakdowns and panic attacks, and I was so incredibly depressed, and I couldn’t get out of the funk, I couldn’t carry on with my life, I couldn’t be happy. I was just always so sad.

Finally, one day, I was driving to school, and I called up my older brother, and I said, “You have to come get me, I can’t drive anymore, I’m crying, you have to come get me and take me to the VA. I just can’t do it. I cannot carry on with my life right now.” So, he took me to the VA, and they got me in right away, and saw a therapist, got on some medication, and after five months, I was doing one hundred percent better.

I mean, I was off medication, I was off—or I was done seeing a therapist, and since then, I’ve had a couple of relapses, not nearly as bad, but times when I had to go back and see a therapist because I was having more nightmares. I was experiencing more—they’re called intrusive thoughts, as opposed to—I wasn’t having flashbacks, I would have thoughts about Iraq, and it would be bad thoughts, and it would make me very upset and depressed again.

And so, now I’m at the point now where I watched fireworks this Fourth of July and didn’t have the urge to go hide underneath a table or go in my car and drive away. I was actually enjoying them for the first time since I’ve gotten home, in four years, I could enjoy fireworks again. So, that’s a very positive thing.

But it’s been a very hard journey, and that’s why I like sharing it with people, so that they can realize what it’s really like for some people. Granted, some soldiers don’t go through PTSD, so they’re fine, and there’s no story to tell there. But I definitely had a lot of struggles with that. 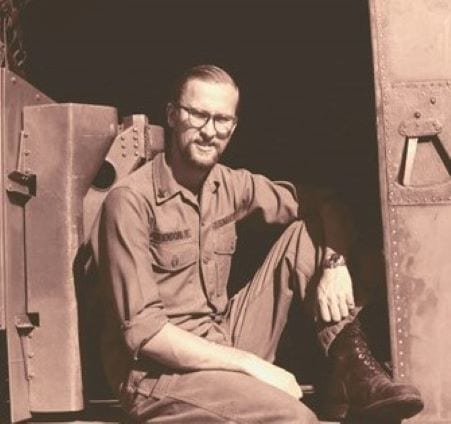 ERIC K. OXENDORF: I don’t mind being open about this, that I had a lot of problems with society and sociability and attitude after I came back for years. And if it wasn’t for the fact that I went into a creative field like photography and the arts, I might’ve really been lost and just been a homeless drunk on the streets.

Finally, in early 2000s the Vietnam veteran was being recognized for the stress that we had to put up with. And when I think back of doing four detachments of a minimum of ninety-one days, seven days a week, twenty-four hours a day working in a stressful combat situation being ready to be blown up by one of your own bombs that’s on a deck, being sunk by enemy fire, whatever. You don’t even think about that anymore.

And I also felt sort of naked because every time I went into Da Nang I’d have a weapon, a sidearm. When I got back to the States, I felt naked that I didn’t have a sidearm. [Laughs] So I had a problem readjusting. And finally the VA [Veterans Affairs] helped me quite a bit and I needed the help.

It just also took a lot for me to admit that. It was their intuitive training that spotted the problems I was having even though it was twenty-five years later. They could see I was having PTSD [post-traumatic stress disorder] problems. And it also caused two marriages and lost friends. 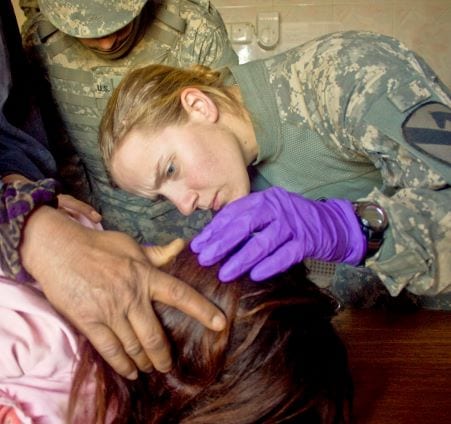 So, it was just me in the middle of this super smelly bright area with people kind of enclosing on either side and I just went “Hmm, no, no.” And I just left my cart and everything in it and I walked out because I just couldn’t handle it.

And I didn’t really—it’s kind of like “Oh, it’s just little things and they’ll kind of go away.” And they did. Just you get used to it again, but it’s just kind of that your sensitivity to certain situations changes. And that’s even without combat necessarily or anything like that. I mean we were taught to be vigilant and that kind of stuff during deployment, like you always have to be aware, but it still changes the way you perceive things when you get home just being gone for even that amount of time.” 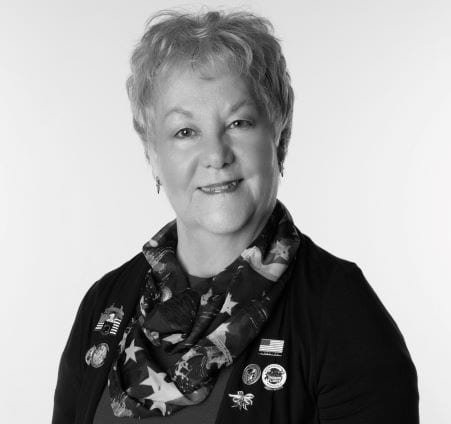 DONNA KLEINMAUS: Being married to a Vietnam veteran with PTSD has not been the easiest thing. And being retired for ten years [laughs] been a lot harder [laughs] but anybody who has seen what they see in war, it takes a person with a lot of character. And I think that I had that character, and had that stamina, and fortitude. And I don't want to leave God out of the picture, trust in God is definitely--that's what kept me in this marriage, because if I had not had Him, I would have been gone a long time ago. So, I'm thankful that we both have a relationship with God, that we can fall back on.

DONNA KLEINMAUS: Well, I don't understand, yet, the extent of it. And I will never--if I've not been there, I won't understand it. But that is why we both are so involved in--we work with the student veterans here at the college, because they don't talk to their families. Johnny did not talk to his family. And before he started getting involved in some of the youth programs through the VFW [Veterans of Foreign Wars], nobody--He worked with three other men who were in Vietnam for thirty-seven years. And it was maybe twenty-seven of those years, nobody knew they were even veterans, let alone Vietnam veterans. 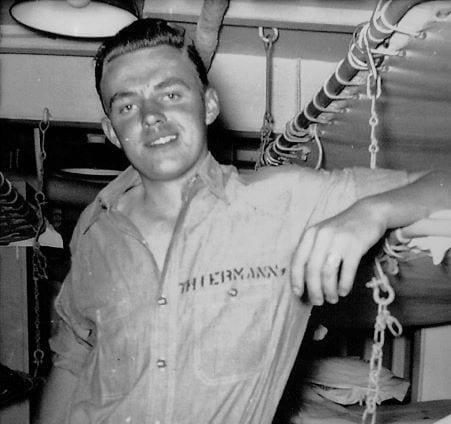 EUGENE D. THIERMANN: Dad and his stepfather used to work out and cut cedar posts which they got about ten cents apiece for. They had to do something to make a living. When World War I came around, he joined the military and he was in the 3rd [Infantry] Division I believe—in the Army—and he went across and fought in the trenches in Europe.

I used to ask him, "Tell me about the war. What was it like over there, Dad?" He'd look at me and shake his head and he said, "You don't want to know." I just kept after him and after him and finally, one day, he said, "One minute you're looking at your buddy and as you're going after a machine gun nest. You're talking and hollering at him and the next minute you look back and his head is gone. When the concussion shells would go off, blood would come out of your eyes, nose, and ears. It was terrible."

At Armistice Day we would stand in the garage or the barn, be working, and when the sirens would blow and everything, he made us hold our hands over our hearts and the tears would come down his face—he was crying. He said he went out with five hundred guys one night—over the top—they came back with twenty. He was one of twenty that came back alive. He said it was very bloody and then he wouldn't tell me anymore. That was it—never got another word out of him. 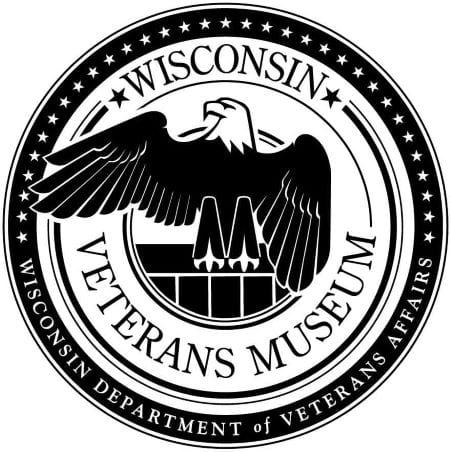 JOSEPH DILLENBURG: I went through another treatment called Cognitive Processing Therapy, where this was just individual, one-on-one, and it was actually looking at my experiences, myself, and kind of reliving them and learn how to think about them again.

Because a lot of it, what they describe a lot of the problem with PTSD is that, if you have a belief about how the world works, and you have, you know, there’s—we all think there’s rules about how the world works. And when those rules get broken it really messes you up because then you don’t know how to—you have—the memories come back because your mind doesn’t know where to put ‘em away. It likes to organize things according to these rules that you have for yourself. But when the rules get broken then your mind, your emotions, don’t know how to deal with it.

Your ticket for the: Reflecting on PTSD: Experiences and Recovery

Reflecting on PTSD: Experiences and Recovery