Pin from the Charles Holt Collection. Charles Lee Roy Holt Jr. was a member of the 102nd Infantry Division who served in the European theater during World War II. At the Elbe river, the 102nd disarmed Germans who were fleeing the Russian Army. At this river crossing, Holt collected pins, toys and other trinkets. “Einbahnstrabe” directly translated it means “On a fixed road/route” but it is also written on one-way street signs.

By the last day of April 1945, it was clear that Allied victory over Nazi Germany was not far off. Russian armies were in Berlin, while American, British, and French armies slashed their way across Germany toward Austria, Denmark, and Czechoslovakia.

This situation was the culmination of simultaneous attacks from the west, south, and east starting in January 1945. On January 12th, Generalissimo Joseph Stalin’s Soviet armies stormed westward across Poland, the Balkans, and Hungary; by March Soviet forces were aiming for Vienna, Danzig, Konigsberg, and Berlin. Starting April 9th, Allied forces in Italy broke into the Po Valley and fanned out into northern Italy. Meanwhile General Dwight D. Eisenhower’s armies drove into Germany from the west, crossing the Rhine in several places during March. His troops surrounded a major German force in the Ruhr, while other units raced east and southeast deeper into Germany, liberating prisoners of war and uncovering horrific evidence of the Holocaust. Eisenhower halted his spearheads at the Elbe River in mid-April. On April 16th, Soviet forces launched an offensive to capture Berlin; after a week of heavy fighting they had surrounded the city and were attacking into the streets. U.S. and Soviet armies met at Torgau on April 25, cutting Germany in two.

In the center of Berlin, Adolf Hitler, the leader of Nazi Germany, issued a stream of orders from his bunker to try and stop the Allied advances. He decided to die in Berlin, and killed himself on April 30th. Grand Admiral (Grossadmiral) Karl Doenitz succeeded him. German forces also began to surrender: first the armies in Italy gave in on May 2nd to the Allied 15th Army Group, while two days later the German forces in Holland and northwest Germany submitted to British 21 Army Group. Smaller German units also escaped to American lines, to avoid being taken by Russian forces.

General Eisenhower summoned German military representatives to Rheims, France, on May 6th. That night he demanded an unconditional surrender of all German forces, but allowed a delay between a surrender being signed and it taking effect. The Germans signed the surrender at 2:41 AM, May 7, 1945. On May 8th, at Russian insistence, a public signing ceremony occurred in Berlin. Hostilities officially ended at 11:01 PM Central Europe Time on May 8, a day since marked by most Allies as VE Day. As Moscow was one hour ahead, ever after the Russians have celebrated Victory Day as May 9.

On June 5, 1945, the four occupying Allied powers – Britain, France, the United States, and the Soviet Union – assumed joint control of Germany through the Berlin Declaration. Each power took an occupation zone, with an Allied Control Council governing the country as a whole. Preparations began for war crime trials, held at Nuremberg starting in November 1945.

The victorious Allies began to reorder Europe, in accordance with decisions made at the Yalta Conference in February 1945. The Soviet Union annexed land from Czechoslovakia, Hungary, and Romania. Poland lost its eastern half but received all German land east of the Oder and Neisse Rivers and in southern East Prussia. Stettin became Szczecin, Danzig became Gdansk, and many other cities received new names. Konigsberg (now Kaliningrad) and northern East Prussia became part of the Soviet Union, territory Russia holds today. These changes in Eastern Europe after VE Day dislocated many people from their ancestral homes, and still mark the area and those associated with it. 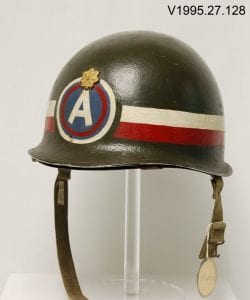 Helmet, M1, Worn by Major Francis T. Brewster while serving as a Military Governor with the Army of Occupation in Germany and Czechoslovakia following the end of World War II.

At the same time, political divisions between the Allies emerged into the open. As Soviet armies pushed out of the Soviet Union into Eastern Europe, Communist governments followed behind. Stalin had agreed to free elections in Eastern Europe, but his agents used all means fair and foul to ensure they returned results favorable to the Soviets. In one notorious case, Russian officers invited sixteen representatives of the Polish government-in-exile for discussion, guaranteed safe passage, and then had them arrested and tried for treason in the so-called Trial of the Sixteen.

As Communism took hold in Eastern Europe, the continent came to be divided into democratic West and Communist East. The Russian occupation zone became Communist East Germany in 1949, while the other three zones combined into the Federal Republic of Germany (West Germany). The West allied in the North Atlantic Treaty Organization (NATO) in 1949, while the East combined into the Warsaw Pact in 1955. This division and resulting conflict, called the Cold War, lasted until the Communist regimes in Eastern Europe collapsed in 1989. Germany reunified in 1990 as one Federal Republic of Germany, which by treaty confirmed its borders as those set in 1945. The last occupation forces left Germany in 1994.

Your ticket for the: Victory in Europe, 1945