On August 6, 1945, Hiroshima became the first victim of an atomic attack. For the first time, nuclear weapons had been used in war. Wisconsin was there.

Twelve days before, on July 25, the War Department instructed General Carl Spaatz, commander of Strategic Air Forces in the Pacific, to use the two atomic bombs on Japan “as soon as weather will permit visual bombing after about 3 August 1945.” The target cities were four: Hiroshima, Kokura (modern Kitakyushu), Niigata, and Nagasaki. All had been chosen because of their military and industrial significance. Hiroshima was also headquarters for the Second General Army, responsible for defending Japan’s western half.

With weather such a critical factor, the Twentieth Air Force, based in the Mariana Islands 1,500 miles from Japan, began a program of B-29 flights over the target areas to assess conditions. To not attract attention, the planes flew singly and swung out over Korea and the East China Sea to avoid giving away their special interest in those cities. 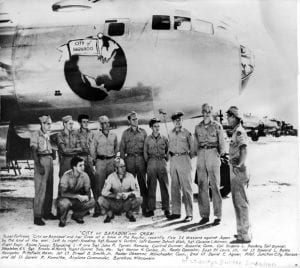 The B-29 City of Baraboo drew the weather reconnaissance mission for August 5. At the controls was Baraboo native First Lieutenant Garvin Kowalke, who had named the plane after his hometown. He flew “a rather uneventful run” and delivered a report of clear conditions. He and his crew knew the extra importance of the mission. “It wasn’t really talked about much,” he later recalled, “but even so, we did feel that what we were doing would end the war and solve all our problems at that time.”

At 2:45 AM the next morning Colonel Paul Tibbetts took off in Enola Gay to carry the bomb, nicknamed Little Boy, to its destination. A weather plane flew an hour ahead and confirmed all was clear over Hiroshima. At 8:13 Enola Gay started its bomb run. Two minutes later Little Boy started downward, exploding over central Hiroshima one minute later.

On the ground, people saw a white flash followed immediately by a massive explosion. The blast rippled across the city, starting a massive firestorm that burned for hours afterward. Between 70,000 and 80,000 died in the conflagration, with up to another 70,000 injured, while 69% of the city’s buildings were destroyed. The devastation covered 4.7 square miles around the explosion point, or hypocenter. From the air, a large cloud of smoke was all that remained of the city.

The next day, Kowalke flew the City of Baraboo back to Hiroshima. This time, his plane was equipped with instruments to measure radiation. To Kowalke, “the nose of the aircraft looked like a porcupine” with all the protruding antennae. The smoking, blackened city made an impression, and he reflected, “one aircraft, one bomb, and there was radiation poisoning in the air.” 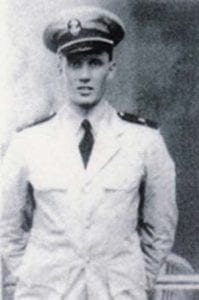 Years after the war, thanks to the research of a Hiroshima resident and bombing survivor, a second Wisconsin connection to the bombing emerged. U.S. Navy Ensign John J. Hantschel of Appleton, the youngest son of the Outagamie County Clerk, had been shot down over the Inland Sea on July 25. He floated for four days before being picked up by a Japanese fisherman and turned over to authorities. Hantschel was taken to the regional prisoner of war administrative center, located at Chugoku Military Police Headquarters in central Hiroshima.

There Hantschel encountered the crews of two B-24s and two Navy fliers from an Avenger, all shot down in the last days of July. Some were held for interrogation, while others were processed and shipped to other prison camps in Japan. Hantschel was held separately from most of the men, for reasons that are unclear. 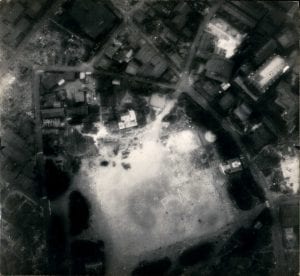 Twelve Americans, including Hantschel, were in Hiroshima on the morning of August 6. Their prison was 400 yards from the hypocenter. Eight prisoners died in the building. Two crawled from the wreckage and were beaten to death on the nearby Aioi Bridge. Two others died of radiation poisoning in August 17. Hantschel was likely one of the eight who died in the prison; his body was never identified, and he is commemorated in the Court of the Missing at the Punchbowl in Hawaii.

Three days later, Nagasaki was struck with the second atomic bomb. To date, these are the only wartime nuclear attacks ever mounted. Since these events, the Hiroshima bomb’s effects have been a benchmark for assessing nuclear weapon capability. Perhaps the greatest deterrent of nuclear use over the last 75 years has been the pictures of the casualties and the two destroyed cities.

Wisconsin was there, in the air and on the ground.

Your ticket for the: Wisconsin and the Bombing of Hiroshima