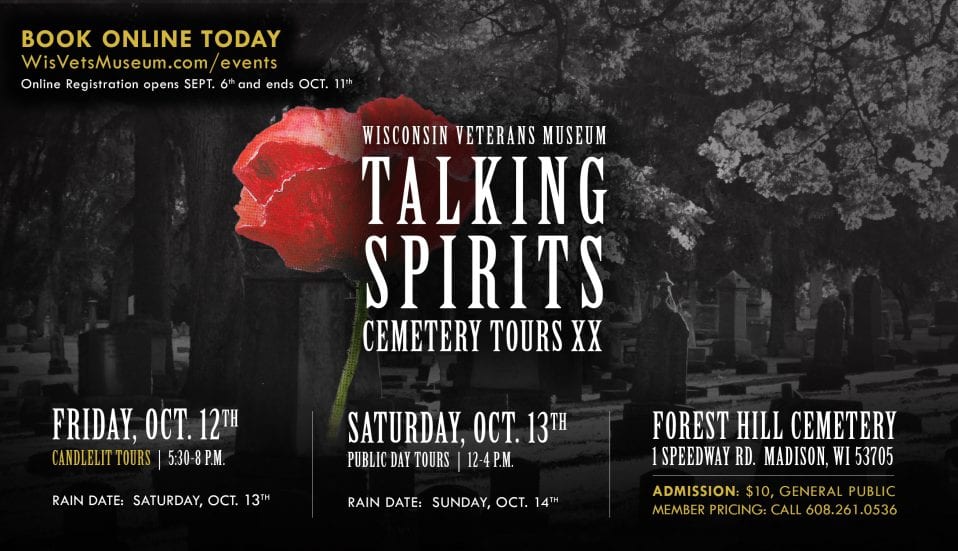 Held each fall at the beautiful Forest Hill Cemetery in Madison, this award-winning living history program illuminates the lives of many prominent and lesser known-figures in Wisconsin history. Tours will focus on the contributions of Wisconsin’s soldiers and citizens during the Civil War and World War I. Local actors and actresses don period dress, giving viewers a first-person encounter through scripted vignettes. Tour guides lead informative discussions of the cemetery’s rich history during the 90-minute walking tour.

Ella Bennett Bresee and her father, James Bennett – James Bennett served under William Vilas in Company A, 23rd Wisconsin Infantry Regiment during the Civil War. Due to wounds he received on an expedition up the Arkansas River, Benett was discharged on April 5, 1863. Bennett later enlisted in Company D, 37th Wisconsin Infantry Regiment on March 11, 1864, where he advanced to first sergeant before being wounded at Petersburg, Virginia. He was breveted First Lieutenant and discharged in May 1865.

His daughter, Ella, was born in 1862 and as a child, would go with her parents to Forest Hill Cemetery on the west side of Madison to decorate the graves of soldiers killed in the Civil War. Due in part to this family tradition, Ella continued with her dedication to patriotism and memorials throughout her life. During World War I, Ella volunteered for the Red Cross and started the first canteen service in Wisconsin.  The stories of James and Ella focus on home front activities and the ways people memorialize and honor men and women who serve in the military.

Lieutenant Hugo Stock and his father, Captain John Stock – On July 10, 1848, eight-year-old John Stock of Bavaria, Germany arrived in New Orleans, Louisiana and began the journey to Wisconsin. Sixteen years later he enlisted in Company L, 4th Wisconsin Cavalry to fight in the Civil War. Upon promotion to First Lieutenant, he was transferred to Company C, eventually mustering out of service as a Captain in 1866. In 1872, John married Selma Diehnelt, another German immigrant, and the two had eight children. Their youngest son, Hugo, graduated from the University of Wisconsin-Madison, and later joined the Wisconsin National Guard and served on the Mexican border. In 1917, Hugo entered the Air Service, training at Taliaferro Field, Texas, where he excelled in his pilot training, advancing to Second Lieutenant. Hugo was killed in a flying accident on September 28, 1918, in Issoudon, France. John, who was ill, died on September 30th, never knowing that his son had preceded him in death. The Stock family story will center on themes of legacy, duty, and obligation.

Senator Robert M. La Follette – A former governor of Wisconsin and a United States Senator since 1905, Robert M. La Follette spent the decades leading up to World War I as a Progressive reformer. In the time before the United States entered into World War I, La Follette expressed concern for the working class and advocated for neutrality in this global conflict. One of only five senators to vote against the War, La Follette, continued to oppose the war despite popular opinion, also voting against establishing a military draft, and the Espionage Act. La Follette believed that the Espionage Act would be used to suppress free speech, which he felt was even more imperative in wartime than in peace. A petition to expel him from Congress began, but as the hearings were scheduled, public opinion shifted. In 1918, Republicans won a majority in the Senate as Wilson lost popularity, giving La Follette a swing vote. A week after the 1918 election, the war ended and later in November, a Senate committee voted against expelling La Follette. In 1923, La Follette was re-elected and reimbursed him $5,000 for legal fees in his expulsion hearings. Senator La Follette’s story will explore the political climate change during World War I and themes of free speech and conviction in personal beliefs.

Private Clifton A. Bewick speaking about Lieutenant Maurice O. Togstad – Maurice Togstad and Clifton Bewick were members of the 32nd Division, Wisconsin National Guard, arriving in France in early 1918, where Togstad quickly earned the rank of first sergeant. In May 1918, Togstad was awarded the Croix de Guerre and a Bronze Star for extreme gallantry in Alsace, and given a field commission to second lieutenant in early November for meritorious service. The day before the Armistice, on November 10, 1918, a German bomb fell near Togstad and Bewick, quickly killing Togstad and wounding Bewick, who was with Togstad as he died. Togstad was buried in a cemetery in Brehville, and then exhumed in 1921 for re-burial in Madison. Togstad’s funeral was held at Bethel Lutheran, where he had been baptized as an infant. Mina Togstad, his mother, was the first Gold Star Mother to sign the charter application for the local Disabled American Veterans post named in part for her son. This story is told from Clifton Bewick’s perspective, covering themes of courage and loss.

This project is supported by Dane Arts with additional funds from the Endres Mfg. Company Foundation, The Evjue Foundation, Inc., charitable arm of The Capital Times, the W. Jerome Frautschi Foundation, and the Pleasant T. Rowland Foundation.

This program is supported in part by a grant from the Wisconsin Arts Board with funds from the State of Wisconsin and the National Endowment for the Arts.

Your ticket for the: TALKING SPIRITS PUBLIC DAY TOURS