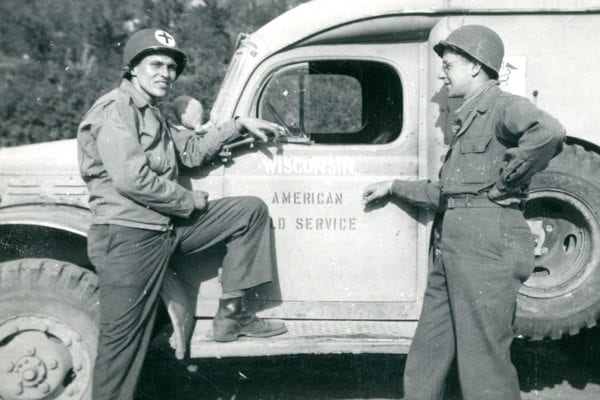 The Wisconsin Veterans Museum’s Marching Across the State, Working Warriors: Military Life Beyond Combat traveling exhibit features the almost 75% of military work that is considered non-combat. These roles rarely make the headlines but are vital to every military operation. Exploring the non-combat roles of military service personnel, including work as beauticians, military police, dentists, mechanics, and photographers. This exhibit showcases an often overlooked, but highly relatable side of military life.

The traveling exhibit consists of indoor, easy-to-assemble, pop-up banners available to local libraries, historic societies, schools and community spaces throughout the state. There is no cost to reserve and host the exhibit, only shipping costs apply.

For more information or to inquire about this traveling exhibit availability call (608) 261-0541 or email TravelingExhibits@dva.wisconsin.gov.

Marching Across the State is funded in part by a grant from the Wisconsin Humanities Council, with funds from the National Endowment for the Humanities.

The traveling exhibit is available to the public at the following locations: N/A

Your ticket for the: WORKING WARRIORS: MILITARY LIFE BEYOND COMBAT–TRAVELING EXHIBIT