Even before the attack on Pearl Harbor, plans were underway to form a military-affiliated organization for women.  Its goal was to train women for noncombatant military positions, thereby freeing men for combat.  Final approval passed Congress in May 1942 and established the Women’s Army Auxiliary Corps (WAAC) “for the purpose of further making available to the national defense the knowledge, skill, and special training of the women of this Nation.” 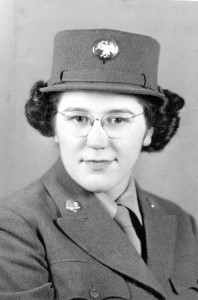 Theresa M. Dischler, a native of Plain, Wisconsin, joined the WAAC in September 1942 and was the first woman from Plain to enlist in the organization.  She arrived at Fort Des Moines, Iowa in October for basic training.  Though never expected to see combat, WAACs nonetheless underwent a condensed version of military training.  In her oral history, Dischler said:

“Our basic training consisted mostly in marching and drills and that type of thing.  There were no guns involved but we did have gas mask training.  KP, naturally, and I think everything else that the boys had.”

Dischler advanced quickly in the new organization and achieved the rank of Sergeant in March 1943.  As part of the 24th Company, 3rd Regiment, Dischler (known as “Sergeant Squeaky” to her fellow WAACs) served in Iowa, Florida, and Washington, D.C., working as a photography specialist as well as a Supply Sergeant.  In her free time, Dischler played her accordion and joined a WAAC baseball team.

While Dischler was successful in her position, she opted not to reenlist when the WAAC lost its auxiliary status and was placed fully under the Army’s jurisdiction in July 1943 as the Women’s Army Corps (WAC).  Instead, she preferred to follow the same adventuresome spirit that led her to join the WAAC in the first place and try new things, although she continued to work toward the war effort as a civilian, transporting army vehicles across the country. 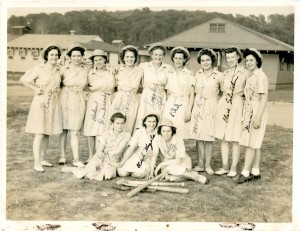 Theresa Dischler and her WAAC baseball team at Bolling Field in Washington, D.C. Dischler, identified as “Squeaky,” is in the back row, second from the left.

Dischler can be seen here in a group photograph of her WAAC baseball team taken at Bolling Field in Washington D.C.

Women’s baseball grew in popularity during WWII due to the formation of the All American Girls Professional Baseball League (AAGPBL).  Founded in 1943 by chewing gum tycoon Philip K. Wrigley, the AAGPBL was created to ensure baseball’s continued popularity while male baseball players were in the military.  It was also used as to encourage WAAC enlistment.  On July 1, 1943, a joint WAAC/AAGPBL rally was held at Wrigley Field to boost WAAC recruitment.  The first game was a WAAC matchup between Camp Grant and Fort Sheridan, followed by an AAGPBL game between the South Bend Blue Sox/Rockford Peaches and the Kenosha Comets/Racine Belles.  A program including “calisthenics, precision drills, a dress parade led by the 28 piece Fort Sheridan band, and recruiting talks…” was held between the two games.  The rally, attended by 7000 fans, included the first night game ever played at Wrigley Field.

Your ticket for: Theresa M. Dischler: A WAAC’s Story