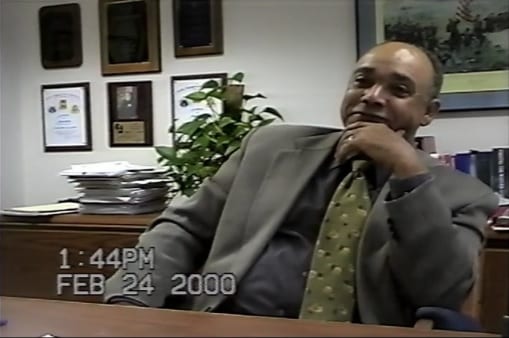 Brigadier General Robert A. Cocroft, at the time of the photo also Deputy Secretary of the Wisconsin Department of Veterans Affairs

Robert A. Cocroft graduated from North Division High School, Milwaukee, Wisconsin, in 1965. While attending and playing football at the University of Wisconsin-Oshkosh, the United States Army drafted him on October 24, 1966. At Fort Leonard Wood, Missouri, Cocroft passed the qualification tests during basic training and decided to become an Army officer. After completing Officer Candidate School (OCS), Cocroft was commissioned on June 13, 1967, and branched infantry and began his active-duty career.

En route to Vietnam, Cocroft attended Airborne School at Fort Benning, Georgia. The Army then gave him a choice between Ranger School and Jungle Warfare Training in Panama. He chose jungle school. After being struck down by illness in Panama’s jungles, Cocroft returned to the United States for several months. He applied for a one-year extension to make the rank of captain.

In 1969, his next duty station was S-1 for the special troops of 8th Army Headquarters at Yongsan Garrison, Seoul, Republic of Korea. While there, Cocroft became familiar with the personnel and human resources for an army headquarters. After serving in Korea and four years on active duty, he returned to Wisconsin and joined the 84th Division in the reserves. Cocroft completed his Bachelor of Science in Agricultural Business Management and then received his master’s degree in Public Policy at the University of Wisconsin-Madison.

In the mid-1970s, then-Vietnam Coordinator for the Wisconsin Department of Veterans Affairs (WDVA) Cocroft networked with the Wisconsin Vietnam Veterans Coalition (WVVC) headquartered at the University of Wisconsin-Oshkosh. The WVVC included Wisconsin Veterans organizations from Oshkosh to Milwaukee: IVOCC/NABVETS, WACVO, Vets for Vets, Vets House, VIS, WDVA, and WVU. Cocroft was a founding member and a later president of the National Association for Black Veterans (NABVETS), originally called the Interested Veterans of the Central City (IVOCC), Milwaukee, Wisconsin.

Meanwhile, on the civilian side of his career, he served as Deputy Secretary of the Wisconsin Department of Veterans Affairs (WDVA) from 1994 to 2002. He was responsible for the day-to-day operations of a state agency that included hundreds of full-time employees, multiple loan and grant programs, skilled nursing facilities, and a museum. These veteran’s assistance programs included mortgage loan programs, home improvement loan programs, and economic assistance loan programs. While at WDVA, Cocroft attended the United States Army War College in preparation for a senior leadership role in the military and received a master’s in strategic studies. During this time, he also served as Assistant Division Commander, 84th Division, Milwaukee, Wisconsin, and later as the Assistant Division Commander (Operations) for the 98th Division, Rochester, New York. Brigadier General Robert A. Cocroft retired from the Army in 2006.

Before his Army retirement, Cocroft worked on plans to create America’s Freedom Center. To be located at the Milwaukee County War Memorial Center, planners envisioned America’s Freedom Center as an interactive experience with multimedia content displaying the entire context of a veteran’s story using oral histories, touchable objects, and visual content to drive engagement. Perhaps even more significantly, Cocroft was the president and CEO of the Center for Veterans Issues (CVI), a statewide non-profit focused on providing housing and support services to improve the quality of life for all veterans’ families and their communities. Cocroft sought to get veterans benefits they earned, including transitional and supportive housing. He held positions on numerous boards, including the National Coalition for Homeless Veterans. While at CVI, Cocroft appeared on the Milwaukee Public Television series 4th Street Forum, Veterans: Battles Faced on the Homefront.

Brigadier General Cocroft passed September 12, 2018, and is interred at the Southern Wisconsin Veterans Memorial Cemetery. In 2019, CVI announced their intention to name their new veterans’ resource center after Cocroft. One thing remains clear. Brigadier General Cocroft held a lifelong commitment to helping veterans. With the most profound respect and gratitude for Cocroft’s service to Wisconsin’s veterans and African American history month, the Wisconsin Veterans Museum Oral History Program presents a video interview with him from February 24, 2000. Please note, this recording has physically deteriorated over the years, and we have done our best to restore it and make it available online. The unpreventable background noise ends at about nine minutes into the recording. 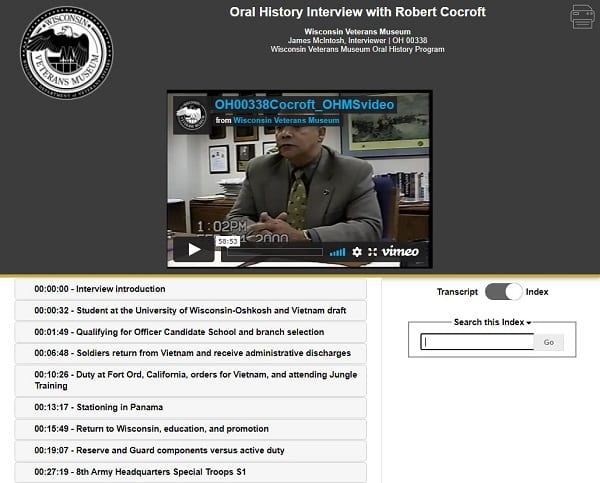 This interview uses an interactive research tool called the Oral History Metadata Synchronizer (OHMS), where you can watch or listen to an interview while exploring the content. OHMS allows you to use the prepared “Index” as a table of contents, similar to chapters in a book, by clicking on them. On the right side of the screen, you may also “Search this Index” for topics or keywords using the keyword search box on the right side of the screen. Within a segment, the “Share Segment” icon allows you to share the URL with other people, and the “View Transcript” icon toggles between transcript and index views. Back on the upper right, moving the selector switch to “Transcript,” you may “Search this Transcript” by word and then jump to that red-lettered word by clicking on it. While in transcript mode, pressing the blue time stamps to the left of the transcript allows you to jump to that location in the interview. There is also a printer icon in the upper right corner of the screen that will enable you to generate a printable document for download that includes the metadata, summary, citations, index, and transcript.

Without any further ado, here is Brigadier General Cocroft’s interview.

Your ticket for: A video interview with Brigadier General Robert Andrew Cocroft