Fifteen minutes before 8 a.m. on Sunday, December 7, 1941, 183 Japanese planes winged in over Kahuku Point, the northernmost tip of Oahu in the Hawaiian Islands. Their commander, Fuchida Mitsuo, surveyed the scene and signaled for the attack to begin. The formation broke apart as groups of planes zoomed toward their targets in and around the U.S. naval base at Pearl Harbor and other points on the island. Those on the ground did not know it, but the United States was enjoying its last minutes of peace.

The attack on Pearl Harbor brought the United States into World War II. It galvanized U.S. popular opinion against Japan and its German and Italian allies in the Axis Powers and marked a watershed in U.S. history. More than 200 Wisconsin service members were on Oahu that day eighty years ago, with over fifty-five killed. This article, along with other sections of this magazine, tells the story of Pearl Harbor through their eyes, using accounts and information from the Wisconsin Veterans Museum Collection. Japan had been on a collision course with the United States and its allies for a long time. When war looked imminent in 1941, the Japanese military decided to launch simultaneous attacks across the Far East. At the start of the war, Japan aimed to eliminate the three great pillars of Allied Pacific defense: the British Force Z at Singapore, the U.S. Far East Air Force in the Philippines, and the U.S. Pacific Fleet at Pearl Harbor. This latter target involved sending six carriers over 4,000 miles from Japan to launch a surprise attack, with the goal of knocking out the American battleships and aircraft carriers.

On December 7, most of the fleet was moored in the harbor around Ford Island, which was home to the U.S. Army Air Force’s Hickam Field. The fleet’s centerpiece was Battleship Row, where seven of the eight battleships moored, four of them in tandem. (The eighth battleship, USS Pennsylvania, was in a nearby dry dock undergoing repairs.) Destroyers, cruisers, and submarines grouped in other places around the harbor. Fatefully, the American carriers were all at sea.

American radar picked up the incoming Japanese planes, but they were mistaken for American bombers due to arrive from California. Japanese midget submarines were spotted and sunk off the harbor’s mouth in the 90 minutes before Fuchida sent his signal. Nonetheless, the Japanese achieved surprise as they started their attack at 7:55.

Madison’s Charlie May was aboard cruiser USS Phoenix waiting for a launch to take him over to church services aboard battleship USS Arizona. “While we were standing there we noticed the planes coming in which we first naturally took as being our own planes and that it was training,” he later recalled.

“We even thought it was training when they started diving on the battleships. But when they started releasing the torpedoes it started becoming evident that it was something else. We noticed the Rising Sun emblem on the planes, and then we knew that it was the Japanese. So about that time, why, the General Quarters sounded, and everyone went to their battle stations.”

At Hickam Field, DeForest’s Art Rortvedt noticed Japanese fighters swooping in as he headed for the bathroom to prepare for his day. “It was just all of a sudden,” he said. "You see, that was normal for on a Sunday morning. It was normal for the navy to play war games. And so that’s what they thought it was at first, because they heard some explosions and things, and thought, ‘Oh they’re playing real good today.’”

Japanese torpedo planes wheeled in over the harbor and started attack runs on Battleship Row. As the same time, fighters and bombers attacked Hickam Field, smaller ships, and naval base installations. As explosions shattered the Sunday peace, those on the ground and on ships scrambled for duty stations and to prepare a defense.

The world found out about the attack at 7:58 am when Rear Admiral Patrick N.L. Bellinger radioed in the clear, “AIR RAID PEARL HARBOR. THIS IS NOT [A] DRILL.”

On Battleship Row, Milwaukee’s Franklin Van Valkenburgh, commander of the Arizona, made his way to the bridge, where he started directing the defense of his ship. Next to the battleship stood the repair ship Vestal, commanded by Milwaukee’s Cassin Young. Visible from Arizona’s bridge were six of the seven ships on Battleship Row; only USS Nevada, moored behind Arizona, was out of view.

Elsewhere on Oahu, confusion reigned as the Japanese attacked other installations at Wheeler Field, Schofield Barracks, and elsewhere. Casualties streamed into Schofield’s hospital, as doctors and nurses set to work. Among them was Manitowoc’s Rhoda Ziesler, who had arrived in Hawaii just weeks before. She worked two days straight and for months afterward slept with a knife under her pillow. (Read more in the Fall 2021 issue of The Bugle.)

After the first wave departed, a second wave of 171 planes followed hard on its heels. These raiders targeted Pearl Harbor and Kaneohe Naval Air Station, facing more prepared defenses than the first wave. As the Japanese appeared, Nevada was underway making a desperate breakout attempt. The new wave of attackers inflicted more damage and confusion, despite significant American defensive fire. The Japanese also forced Nevada to beach herself rather than be sunk in the channel leading to open sea. The hurricane of raiders ended shortly before 10:00 am.

“There were a lot of rumors around” regarding more attacks, possible landings, and other developments," remembered Rortvedt. 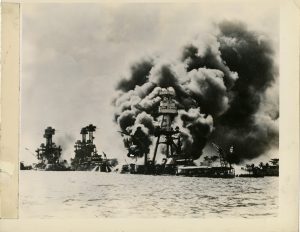 Ahead of Arizona, Japanese torpedoes hammered West Virginia, Oklahoma, and California. Bombs and strafing targeted Tennessee and Maryland. Several torpedoes hit Oklahoma in quick succession, and within minutes she capsized.

West Virginia nearly suffered the same fate, but quick-thinking damage control officers counter flooded and she started sinking on an even keel to the bottom. Suddenly a Japanese bomb detonated the forward magazine of Arizona. The ship leapt up as a massive fireball engulfed her. The explosion’s pressure wave reverberated across the harbor, blowing Young overboard. Stunned and injured, he swam back to his ship and resumed command. With Vestal afire and taking water, Young ordered her to get underway and away from Arizona lest another explosion do more damage.

But the fighting was over for the day. Against a loss of twenty-nine Japanese planes shot down, seventy-four damaged, and sixty-four dead, 2,403 Americans were killed and another 1,178 wounded. Every battleship at Pearl Harbor was damaged or sunk, along with three cruisers, four destroyers, and several other ships. Ashore, 188 aircraft were destroyed and another 159 damaged. This was the worst defeat the U.S. Navy had suffered since the Civil War.

The greatest loss of life was in the sinkings of Arizona and Oklahoma, which claimed 1,177 and 429 dead, respectively. Many aboard Arizona lie entombed in the hull, which is preserved as a memorial, to this day. Others were consumed by the fires that raged aboard for days; Van Valkenburgh’s body met this fate, his Naval Academy ring the only item recovered. At least nineteen other Badgers died on Arizona with him.

Images After the Attack on Pearl Harbor from the Haessly Collection 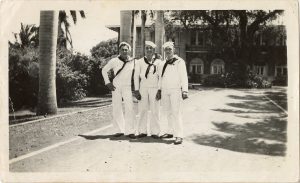 Two of the sixteen Medals of Honor earned that day went to Young and Van Valkenburgh. Young received his “for distinguished conduct in action, outstanding heroism and utter disregard of his own safety, above and beyond the call of duty.” Van Valkenburgh’s was one of eleven posthumous awards, citing his “conspicuous devotion to duty, extraordinary courage and complete disregard of his own life.”

Of the twenty-one ships lost or damaged on December 7, only three —Arizona, Oklahoma, and Utah —never returned to duty. The unidentifiable bodies recovered by salvors, including 388 from Oklahoma, were buried in the Punchbowl in Honolulu. Oklahoma’s total included ten Badgers, including New London’s three Barber brothers, whose loss “filled the town with tears” according to the local newspaper. In 2015, the Department of Defense started identifying these men through DNA testing, and as of this writing less than thirty-five men from Oklahoma remain unknown. In June 2021, the three Barbers were positively identified after seventy-nine years.

On December 8, people all across Wisconsin gathered around their radios as President Franklin Roosevelt pronounced December 7, 1941 as “a date which will live in infamy.” Within a week the United States would be at war with the entire Axis, a conflict lasting until 1945. Over 332,000 Badgers served in World War II on all battlefronts, with over 8,000 paying the ultimate price. Wisconsin’s service and sacrifice started in the first minutes of the war at Pearl Harbor.

Your ticket for: Badgers and the Day of Infamy