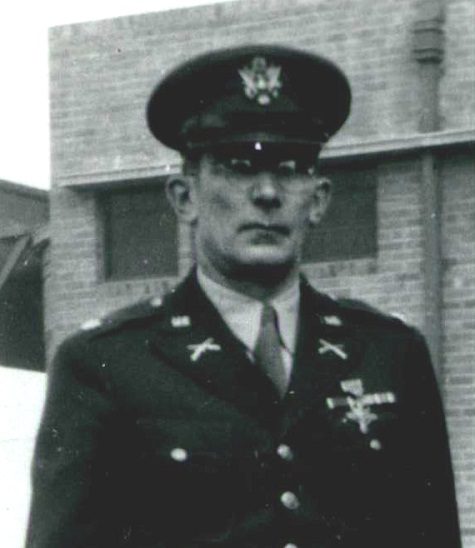 Presentation of the Distinguished Service Cross to Lieutenant Colonel Herbert M. Smith for his service while serving in the Battle of Buna-Gona. Photo credit: Mss2003.087.

On December 7, 1942, a year after the Pearl Harbor Attack, Herbert M. Smith of Neillsville, Wisconsin, was wounded in the Battle of Buna-Gona while encouraging E and G Companies of 2nd Battalion, 126th Infantry Regiment, 32nd Division. The battle for Buna remains one of the most brutal engagements of World War II for the 32nd Infantry Division and was the first United States division to take offensive action against the Japanese in the southwest Pacific.

The story of the “ghost soldiers” of the 2/126th and Smith began before Pearl Harbor. Smith enlisted in the Wisconsin State Guard in 1919. Before World War II, the 32nd Infantry Division trained for warfare in the European Theatre, with the initial expectation that they would be sent to Europe to fight, but this would not be the case.

Instead, orders came down ordering the 32nd Division to deploy to the Pacific to prevent the Japanese from moving on Australia; New Guinea was part of that equation. The 126th Infantry Regiment was composed mainly of Michigan National Guard; however, as in Smith's case, soldiers from Wisconsin and the upper Midwest were transferred from other regiments within the 32nd Division.

The 2/126th battalion shipped out of San Francisco on the S.S. Lurline on April 22, 1942, and arrived at Adelaide, Australia, on May 14, 1942, and later trained at Camp Sandy Creek. They then moved to Brisbane, Australia, and trained at Camp Cable, and then moved onto Port Moresby, New Guinea, in September 1942. At the time, then-Major Herbert Smith served as the S-4 (logistics) for the 128th Infantry Regiment, a Wisconsin National Guard, within the 32nd Division.

Following an initial assignment with the Australians, the command sent the 2/126th over the Owen Stanley Mountain Range on foot, whereas the rest of the 32nd Division would fly over these rugged mountains. What took forty-five minutes by aircraft took forty-two days on foot for the 2/126th. Conditions on the Kapa Kapa Trail were difficult for the unit with soldiers from the upper Midwest. The trail was a muddy footpath in an equatorial jungle, often with vertical climbs that each took a day to complete. The Owen Stanley Range included a nearby mountain named "Ghost Mountain," a moniker that stuck with the unit. When Lieutenant Colonel Henry A. Geerds, died of a heart attack, two days on the march out of Port Moresby, the Smith took over command of the 2/126th.

Almost all of the soldiers caught malaria and had chills that they lived with while under fire. Dengue fever, jungle ulcers, and dysentery weakened the soldiers of the 2/126th but did not stop them. Without the logistical support of the New Guineans, the foot march would have likely been a complete failure. Australians, as well, provided invaluable jungle expertise to the American unit.

Lack of heavy artillery meant that the firepower that the 2/126th had was undersized for knocking out the reinforced bunkers that the Japanese had built over the previous weeks. Moreover, their emplacements included camouflaged pillboxes and interlocking fields of fire. Not only that, the Allies anticipated a smaller Japanese force. Instead, the Japanese had two to three thousand more soldiers.

The Americans and their Australian allies had underestimated the strength, determination, and careful deliberation with which the Japanese prepared their in-depth position at Buna. As a result, it is estimated that the 2/126th suffered a seventy-five percent casualty rate at the Battle of Buna, including Herbert M. Smith, Clarence R. Stine, and other soldiers from Wisconsin, Michigan, and the upper Midwest.

On December 1, 1942, Lieutenant General Eichelberger took back leadership from Major General Edwin Forrest Harding, the 32nd Infantry Division commander. Smith was present at this leadership change and shared his thoughts on it in his 1991 interview (WVM.OH1100). MacArthur was not pleased with Harding's progress and wanted to see a more aggressive offensive at Buna and sent in Eichelberger.

However, once in battle himself and taking fire at the front, Eichelberger grew a keen appreciation of what the 32nd Division was up against and chose to simplify the command structure, resupply, and refit the worn-out 32nd Division, and bring in substantially more soldiers. Eichelberger left the battalion commanders in place, including Herbert M. "Red" Smith.

On December 5, 1942, Urbana Force punched through a hole in the Japanese line that separated Buna Village from Buna Mission and created an opening to the ocean. Two days later, a shrapnel shell burst in the canopy above Smith, killing others and injuring Smith, who was flown out. It would be January 22, 1943, before the Battle of Buna-Gona ended. By then, the 2/126th was down to 165 soldiers, having started with around 1200 soldiers in November 1942.

At the Wisconsin Veterans Museum, we have substantial research resources to help understand the plight of the 2/126th and Smith’s story.

We have four different interviews with Herbert M. “Red” Smith (click to view): 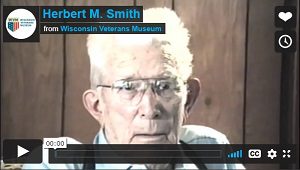 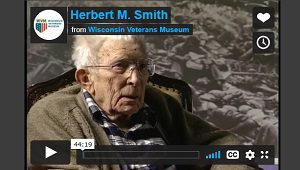 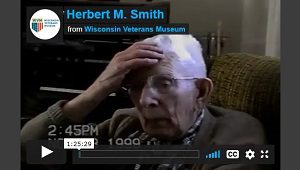 1999 Video interview with James McIntosh for the Wisconsin Veterans Museum

We also have Herbert M. Smith's papers in our archives; use call number Mss2003.087.:
Four score and ten: happenings in the life of Herbert M. Smith
Hannibal had elephants II: Papua, New Guinea, 1942
The early years of World War Two 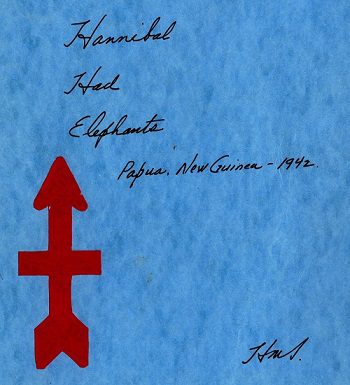 We have a related book for sale in our online bookstore: The Ghost Mountain Boys: Their Epic March and the Terrifying Battle for New Guinea

In the future, we hope to post another Ghost Mountain soldier’s perspective in an interview with Clarence R. Stine, also a veteran of this unit.

Your ticket for the: Ghost Mountain commander from Neillsville