Part of the George Wanserski WVM Collection by Laura Farley 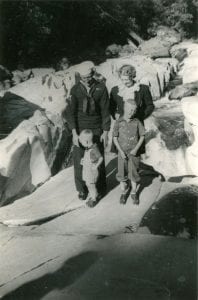 This is a love story about Wisconsin natives George Wanserski and Florence Lange that spans nearly five years of separation and struggle to raise their family. Married July 18, 1934, the Wanserskis set up home in the Milwaukee area and had two boys, George Jr. and Richard, at the onset of World War II. George, a member of the United States Naval Reserves since 1928, was called into active duty at the beginning of war in Europe and assigned to the USS Gilmer in Seattle, Washington.

When a service member enlists, the entire family serves. The Wanserski collection is special in that Florence’s experience of war is represented just as much as George’s. Often military correspondence collections consist of letters written by a service member and sent home. It’s rare to have surviving letters written to an active duty spouse. In the almost daily letters between George and Florence are details about George’s naval service and the financial and parental challenges Florence faced on the home front. All the letters reflect the deep longing George and Florence felt to be together (“You know George I believe our thoughts are the same even when we are so far apart.”) .

With George away, Florence’s financial situation became dire. Consequently in 1941, George appealed to Wisconsin Congressman Stephen Bolles to be discharged from the Navy. His attempt was ultimately unsuccessful, and the Wanserskis missed each other so terribly that Florence and the boys soon moved to Seattle in hopes of spending more time with George. In 1942, to be nearer to his family, George transferred to the USS Buckeye, which was patrolling the Pacific coast for Japanese submarines. However, the family’s time together was cut short when George’s service took him to the Aleutians Islands in Alaska, where he faced constant bombardment by Japanese planes. Florence must have been terrified to have her spouse combatting the Japanese in the wake of Pearl Harbor (“Here it is Friday and still no letter from you… I haven’t eaten any of my finger nails yet though.”) In 1943, George spent time in the U.S. Naval Hospital in Adak, Alaska for unknown reasons, before returning to Washington and Oregon for the remainder of the war.

George and Florence’s letters chronicle their hopes of being reunited (“If dreams come true I will try to dream of the day when I can be with you.”) , and the development of their boys, including the birth of a third son, Marty. On July 27, 1945, George was honorably discharged and the family returned to Wisconsin, where a fourth son, Daniel, was born. Florence’s last letter to George on July 8, 1945, closes with: