The Indigenous Peoples of Wisconsin have a long and proud history of serving in the United States military. From the American Revolution, in which the Oneida were one of the few Native nations to side with the colonists, to the present, when Wisconsin Native men and women serve in every branch of the military, theirs is a story that deserves to be told and honored. The Wisconsin Veterans Museum considers it a privilege to preserve and share some of these stories. 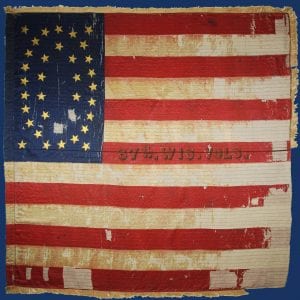 During the Civil War, over 500 Wisconsin Native Americans volunteered for service in the Union Army. Among them were more than forty Menominee men who served in Company K, 37th Wisconsin Infantry Regiment. Oral history suggests that Corporal Seymour Hahpahtahwahnoquette and Sergeant John  Gaillaino translated orders into the Menominee language for the non-English speaking men. On July 30, 1864 they took part in the infamous Battle of the Crater, and at least seventeen Menominee men were killed, wounded, or missing following the action. Among those who gave their lives were Corporal  Hahpahtahwahnoquette, Joseph Nahwahquah,  Amable  Nashahkahappah, and Felix Wahtahnotte. 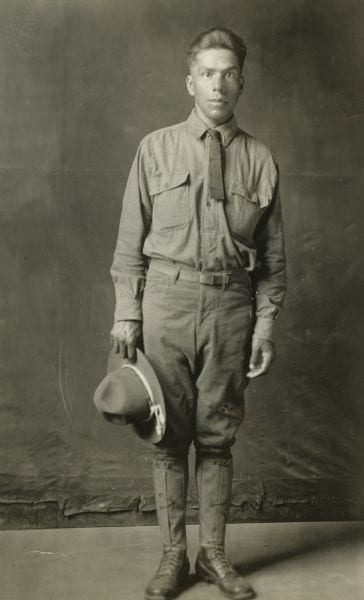 Gus Sharlow was one of the Lac Courte Oreilles in Co. D, 107th Ammunition Train.

Roughly fifty years later, Wisconsin’s Indigenous Peoples again answered the call to serve during World War I. Among the hundreds to volunteer were over fifty members of the Lac Courte Oreilles band of the Ojibwe  nation. Many were members of the Wisconsin National Guard unit based in nearby Hayward, and they became members of Company D, 107th Ammunition Train of the 32nd Division. A regimental history states that the men of Company D had a black bear as a mascot. They deployed to Europe in early 1918 and took part in all the campaigns and battles of the 32nd Division, in which it earned the nickname “Red Arrow” for piercing every enemy line placed in front of it.

The Navajo Codetalkers are celebrated for their incredible contribution to the war effort in World War II.  Their native language proved to be a code that the Japanese could not crack, allowing
American troops in the Pacific to relay vital messages safely and securely. While not nearly as
widely known, several Wisconsin tribes used their native languages to transmit messages, as well.
The Oneida were among the tribes honored by the US government in 2013 for their role as codetalkers
during World War II. 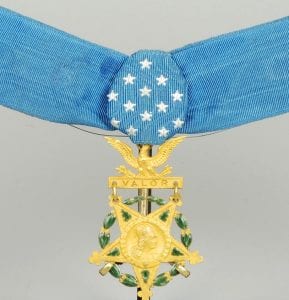 Mitchell Red Cloud’s Medal of Honor is proudly preserved in the WVM collection.

Mitchell Red Cloud, a member of the Ho Chunk nation, served as a Marine in World War II and with the Army in the Korean War. On November 5, 1950 he detected the approach of enemy forces and, after raising the alarm, began firing. He continued to hold his position and fire, giving his unit invaluable  time to set up a defense. He refused assistance after being severely wounded, wrapped his arm around a tree to remain upright, and continued firing until receiving mortal wounds. Red Cloud received a posthumous Medal of Honor for these heroic actions.

Wisconsin Indigenous People have continued to serve bravely in the US Armed Forces in Vietnam, Desert Storm, and Operations Enduring Freedom and Iraqi Freedom, as well as during peacetime. The Wisconsin Veterans Museum is proud to share these stories on Indigenous Peoples’ Day and would be honored to preserve and share even more. If you are a Wisconsin Native American veteran, or know one, please consider contacting us to find out how to preserve the memory of that service for future generations to honor.

Your ticket for: Indigenous Veterans of Wisconsin