With the European and Pacific Theaters garnering most of the attention during World War II—both in regard to resources and the public’s interest—the China-Burma-India Theater became known as the “Forgotten Theater” despite its strategic significance during the war. In the early 1940s, the US was eager to support China in their war against Japan, and along with their British allies recognized the importance of stopping the Japanese advancement across Southeast Asia. After the Japanese invaded Burma in spring of 1942 and cut off China’s last overland route to India, focus turned to keeping the Chinese supplied via airlifts across the Himalayas while simultaneously attempting to open another supply route through the treacherous terrain of northern Burma. Representing less than two percent of the US Armed Forces, however, meant relatively little acknowledgement for the troops who were subjected to the regions inhospitable conditions. For Pfc. John I. Vlossak, the slight was still felt even when coming home, with months having passed since both V-E and V-J Day resulting in him and his fellow China-Burma-India (CBI) comrades returning to comparatively little fanfare.

Vlossak, a native of Palmerton, Pennsylvania who later settled in Appleton, Wisconsin, was inducted into the US Army on February 25, 1943, and served initially at the Valley Forge Hospital in Pennsylvania for a year before the Army realized that he had not completed basic training. After rectifying the situation at Camp Barkley, Texas, Vlossak was transferred to Calcutta, India where he was assigned to the 142nd General Hospital. 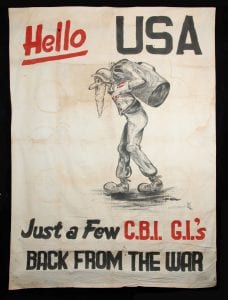 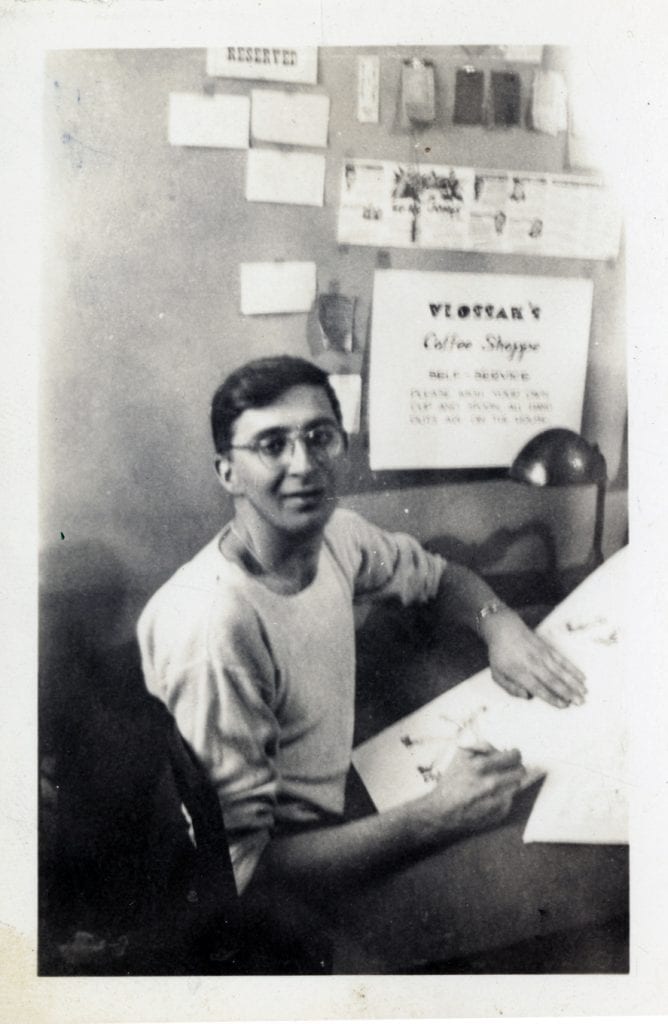 Photograph of John Vlossak illustrating cartoons at his drafting table. Courtesy of John I. Vlossak

Vlossak arrived in Calcutta in May of 1945, and wrote home to his parents on the day he arrived and said, “As you see by my new address I got that assignment to the 142nd  Gen. Hosp. I got here this afternoon and it looks like a swell deal, so-far….I’m glad I got an assignment. Now I can get down to work. There weren’t very many fellows sent with me. I only know a few of the boys.”

While Vlossak spent his days working as a Medical Laboratory Technician at the hospital, he was able to spend his free time painting posters and drawing cartoons while at the American Red Cross Burra Club, a leave center and recreation spot for enlisted US service members. Many of his cartoons were published in local CBI newspapers, the themes often offering a humorous look at daily life for soldiers in the China-Burma-India Theater.

Weekly newspapers such as the CBI Roundup (renamed the IBT Roundup by the time of Vlossak’s arrival) were important both for morale building as well as staying in touch with current events elsewhere in the world. The CBI’s first commander General Joseph W. Stilwell summed it up in the second issue of the CBI Roundup on September 24, 1942 when writing, "The main purpose of this paper is to keep the command informed of what is going on at home and in the other theaters of war. We are a long way out, the mail is slow, and all censors are crabs, so Roundup should help materially to fill in the gaps. It's your paper, so feel free to contribute to it.”

While many of his original illustrations were kept by the newspaper printers and lost to time, perhaps the best representation of these sentiments was actually illustrated upon a bedsheet, now part of the WVM permanent collection. Finally homeward bound in the spring of 1946, Vlossak repurposed his bedding for making this banner to hang from the side of his transport ship when pulling into port. His depiction of a hunched soldier with long beard and a half-hearted greeting illustrate Vlossak’s perception of a lack of enthusiasm for the return of CBI troops, at least when compared to other GIs who arrived home earlier and were heartily celebrated upon their return. Even as late as May of 1946, over 1500 troops still remained in Calcutta, and indeed must have felt quite forgotten. But this shared history led to camaraderie amongst veterans of the CBI. In 1948, the China Burma India Veterans Association (CBIVA)—the first national veterans group to represent an entire theater of war—was founded in Milwaukee, Wisconsin and remained active until disbanding in 2005.

Banner image credit:  John Vlossak photographed in a U.S. Army Jeep outside of a Calcutta air raid shelter, 1945.  Courtesy of John I. Vlossak 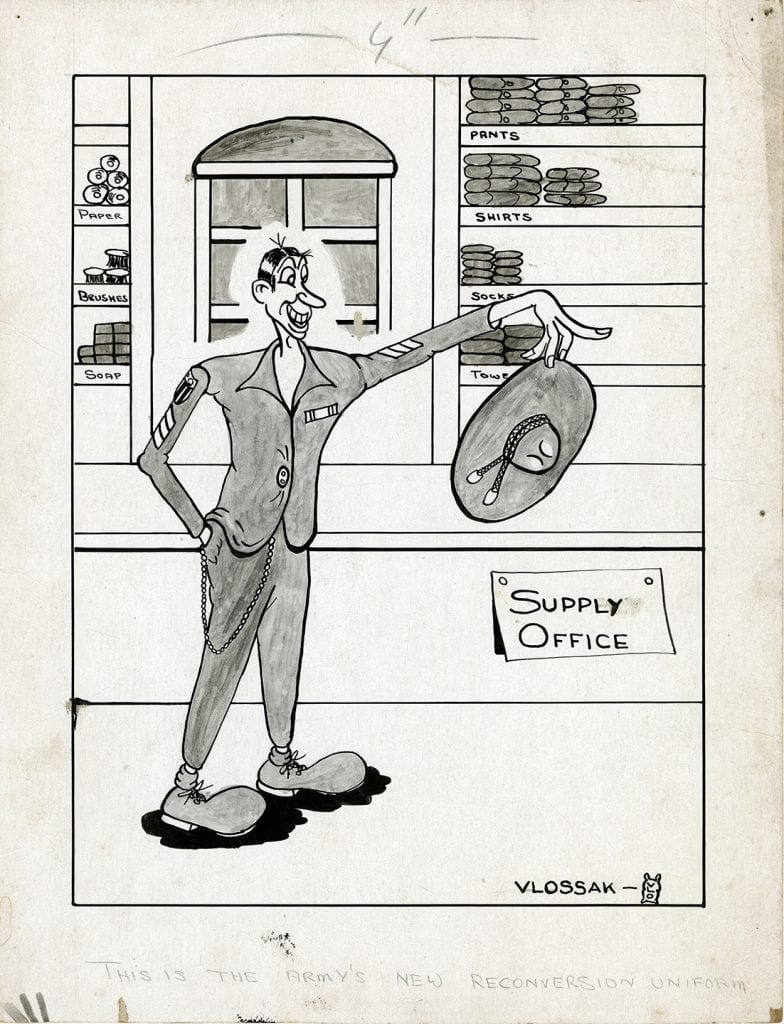 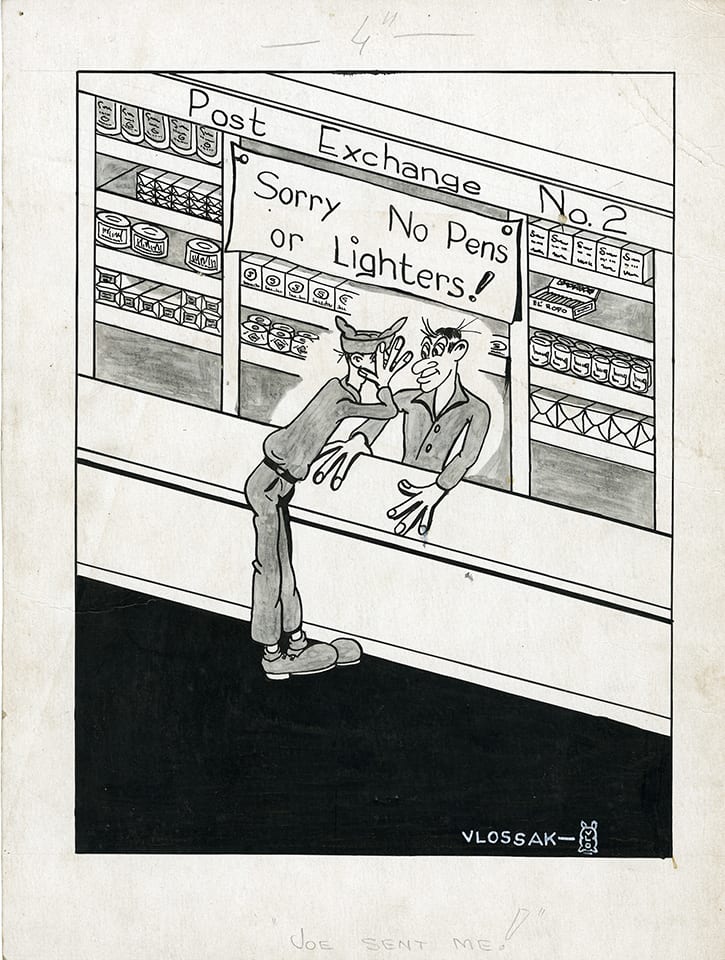 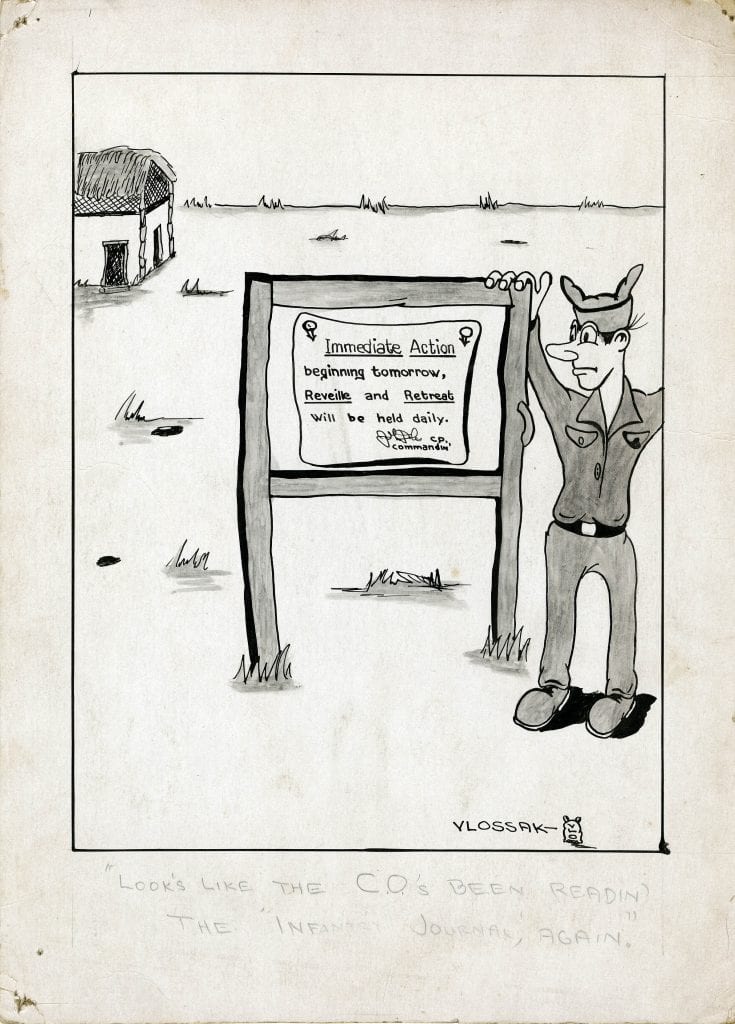 Your ticket for: Just a Few C.B.I. G.I.s Back from the War