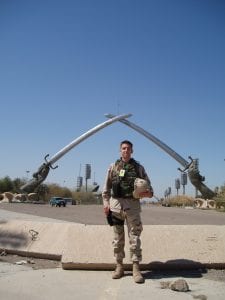 Karl Hanson in front of the Arc of Triumph (or the Swords of Q¯adis¯iyah) in Baghdad, Iraq

After completing the Armor Officer’s Basic Course, where he made the Commandant’s List, Hanson was commissioned an Army Armor officer in 2000 as platoon leader with Task Force 1-64 Armor, Camp Dobol, Bosnia-Herzegovina. Returning stateside, he served as a tank platoon leader with Company A, 1st Battalion, 64th Armor, at Fort Stewart, Georgia. From 2002 to 2003, he served as the executive officer of Troop F and Headquarters and Headquarters Troop, 1st Squadron, 16th Cavalry Regiment, Fort Knox, Kentucky. After serving as 1st Squadron’s adjutant, he was promoted to captain in 2003, and assumed duties as the regimental adjutant in 2004. Hanson then completed the Armor Captain’s Career Course, where he made the Commandant’s List for a second time. Deployed in 2005 to Headquarters Multi-National Force – Iraq as a liaison officer in the Iraqi Prime Minister’s Situation Room, Hanson soon took command of the 16th Cavalry Regiment’s Headquarters and Headquarters Troop. 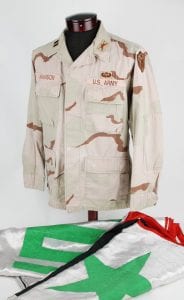 With more than six years of service, Hanson joined the Wisconsin Army National Guard in 2007. He served as the adjutant of 1st Squadron, 105th Cavalry, and took command of Troop B, 1st Squadron, 105th Cavalry (Watertown, Wisconsin) in November 2007. The unit deployed in 2009 as part of Operation Iraqi Freedom, conducting a security and base defense mission at Forward Operating Base Cropper, in Baghdad.

Hanson is now a circuit court judge in Rock County. He is a proud father of three children and married to Dr. Susan M. Hanson, a lecturer in biology at Carroll University in Waukesha.