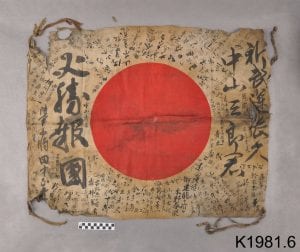 Originally owned by Nakayama Saburota, captured by Richard M. Wolf, 2nd Battalion, 4th Marine Regiment, 6th Marine Division on June 12, 1945 on Oroku Peninsula on Okinawa. This WWII Battle flag is thought to be a Japanese Thirty-Second Army Flag, or attached to the same command. The burn holes on the flag are from hand grenades and there are blood stains.

The remnants of Ushijima’s army, now reduced to 30,000 men, only 11,000 of whom were trained infantrymen, desperately dug in along a range of hills six miles south of Shuri. This position, which Ushijima ordered to be held to the death, centered on Kunishi Ridge and two hills named Yuza-Dake and Yaeju-Dake. The Americans nicknamed the latter the “Big Apple” because of its shape.

While Tenth Army’s main forces probed these defenses, the 6th Marine Division turned its attention to the Japanese naval units defending Oroku Peninsula. The Marines attacked into the peninsula both from the sea and from its base, and soon surrounded its 4,000 defenders among the hills in the peninsula’s center. In a rough replay of the April battles, the Marines slowly cleared the hills in ten days. By the end, the defenders were wiped out against a loss of 1,608 Marines.

Starting June 9, Tenth Army attacked Ushijima’s final line. The Army’s 7th Infantry and 96th Infantry Divisions fought around the Big Apple, while the 1st Marine Division faced Kunishi. Over eight days of fighting, the Americans methodically eliminated each Japanese strongpoint. Artillery and airstrikes pounded Ushijima’s positions, while American tanks aggressively assisted the infantry assaults. In some cases, gasoline was poured into caves and bunkers and set alight. Ushijima ordered counterattacks, but they all failed. By late on June 17, the last Japanese line on Okinawa had been overcome.

On June 18, Buckner visited the front to watch a newly-arrived Marine regiment go into action. He stood on a hill next to a coral rock outcropping for an hour, then turned to leave. Just then a Japanese shell hit the rock, driving a chunk into General Buckner’s chest. Within minutes Buckner was dead, the senior American officer killed by enemy fire in World War II. General Geiger took command, becoming the only Marine to ever command an American field army.

This is the last photograph taken of Lt. Gen. Simon B. Buckner, Jr., USA, right, just before he was killed on 18 June, observing the 8th Marines in action on Okinawa for the first time since the regiment entered the lines in the drive to the south. Note the rock and coral outcropping to his left. The shell that exploded hit that outcropping, dispersing fragments into the general, killing him within a few minutes. The other two staff officers were not seriously hurt. USMC Photo, PUBLIC DOMAIN

The Americans pressed the attack into Okinawa’s southern extremity. On the morning of June 22, as troops of the 7thInfantry Division neared the 32d Army’s headquarters cave, Ushijima and his chief of staff, Isamu Cho, committed ritual suicide. “Our strategy, tactics and methods were all utilized to the utmost and we fought valiantly,” radioed Ushijima to Tokyo before his death, “but they had little effect against the superior material strength of the enemy.” 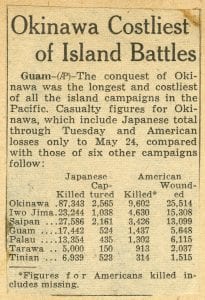 Geiger raised the American flag over Okinawa on June 22. The next day, General Joseph W. Stilwell took command of Tenth Army. American forces started a sweep north, resulting in another 9,000 Japanese dead and 3,800 prisoners. Stilwell declared combat operations over on July 2, 91 days after the landing at Hagushi.

The Battle of Okinawa was the bloodiest single engagement of the Pacific War. Total U.S. battle casualties (Army, Marine, and Navy) totaled 49,151. Tenth Army also sustained another 26,211 nonbattle casualties, bringing the total American losses to over 75,000. Virtually all members of 32d Army perished except for 7,000 prisoners, more than captured in all previous battles of the Pacific War combined. Of 450,000 Okinawan civilians, 82,000 died during the fighting or committed suicide at the battle’s end.

Considered as a dress rehearsal for an invasion of Japan itself, the Battle of Okinawa offered a sobering preview of the future. Okinawa itself would be a major base for that operation, should it occur.

Before his death, General Buckner pointed out to Admiral Nimitz Okinawa’s postwar value to the United States. Others shared his view. The island became a U.S. protectorate after World War II until its return to Japan in 1972. American bases on Okinawa became key staging areas for the wars in Korea and Vietnam. “Without Okinawa,” stated Admiral U.S.G. Sharp in 1965, “we cannot carry on the Vietnam War.” Today the island remains a vital outpost for the United States in the Pacific. 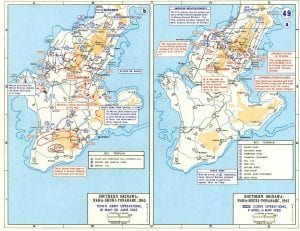