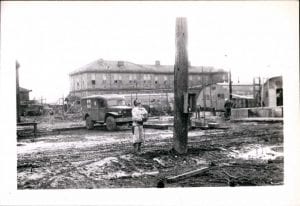 On June 18, the day General Buckner was killed, President Harry Truman met with his senior military and civilian advisors to discuss the next steps in the war against Japan. General MacArthur estimated 100,000 U.S. losses in the first 30 days of an invasion of the Japanese home islands, while Army planners in Washington estimated casualties as high as 1 million for the Allies alone during the entire operation. Bombing and blockade also emerged as possible options for use against Japan. Truman tentatively approved the invasion plan, with a landing on Kyushu (Operation OLYMPIC) set for November 1, 1945 and the invasion of Honshu (Operation CORONET) in spring 1946. 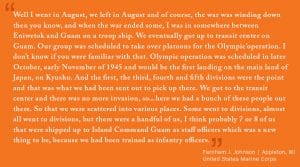 At the same time, Japan’s government prepared for the final battle on the home islands. U.S. bombers had destroyed most of the country’s major cities and industry, 13 million Japanese were homeless, and the average citizen lived on 1500 calories per day. Two-thirds of Japanese felt “personally unable to carry on with the war.” The government had put out feelers for a potential peace settlement.

Nonetheless, the military held a controlling influence on the government, as it had for decades. Japan had never lost a war, and the top military men were determined to continue until victory or death. “Even if the Japanese people are weary of the war,” insisted Navy Minister Admiral Soemu Toyoda, “we must fight to the last man.” War Minister General Korechika Anami supported him, since the Imperial Japanese Army had over 5 million men still under arms, 2 million of them in the home islands. Anami’s troops had correctly guessed the likely landing beaches, and were busily fortifying them; over 10,000 planes stood ready to act as kamikazes. Millions of civilians had been mobilized and armed with primitive weapons. “We must be ready to settle the war by drawing on our Japanese spirit and killing” the invaders, a teacher informed her students. “Even killing just one American soldier will do.” Secret orders had also been issued to execute all Allied prisoners of war as soon as the invasions of the home islands and Southeast Asia started.

U.S. signals intelligence tracked all of Japan’s preparations and diplomatic efforts. Planning and preparations for OLYMPIC continued. In Europe, U.S. First Army headquarters transferred to the Philippines, while other units prepared to follow. On July 16, 1945, the first atomic bomb was successfully exploded in New Mexico. Two more would be ready for use in early August 1945. Components for both bombs traveled to the Mariana Islands via plane and the cruiser USS Indianapolis.

News of the bomb reached Truman at Potsdam in Germany, where he was meeting with his counterparts, Joseph Stalin of the USSR and Winston Churchill of Great Britain, to discuss postwar Europe. The British and Americans developed a 13-point message to Japan. Issued on July 26, the Potsdam Declaration used stark language. “We call upon the government of Japan to proclaim now the unconditional surrender of all Japanese armed forces, and to provide proper and adequate assurances of their good faith in such action,” it said. “The alternative for Japan is prompt and utter destruction.” Japan’s government made no reply, which the Allies interpreted as a rejection.

On August 6, 1945, Hiroshima became the first victim of an atomic attack. Three days later, Nagasaki suffered the same fate. The bombs obliterated large sections of each city, and killed over 130,000 people; many more later succumbed to radiation or wounds. The Hiroshima bomb also wiped out Second General Army headquarters, responsible for the defense of Japan’s western half.

“Then the atomic bomb went off and that plane that let the atomic bomb go–the first or second one–flew right over our camp. And we could have it with a stone–it was heavy, B29, and in those days a B29 was an enormous airplane. It’s a small shrimp now but big, big, big–well it flew over us, and the atomic bomb was dropped.”

News of Nagasaki reached the Japanese government not long after an announcement that the Soviet Union had entered the war against Japan. For hours debate raged back and forth over what to do. Finally Emperor Hirohito, in a break with tradition, intervened and ordered his government to accept the Potsdam terms. After an exchange of messages in which the Allies agreed that the Emperor would remain in office, Japan decided to surrender. Hirohito recorded a surrender message at NHK’s Tokyo studios for playing at midday on August 15.

“Oh yeah, we [had] seen the light. It lit up the whole – It was daylight, and it lit up just like it was an arc welder, you know, that’s going on, a big arc welder. But we never realized what it was you know, at that time. It was something new to us.”

As word filtered out about the surrender, diehard officers of the Imperial Guard tried unsuccessfully to seize the recordings and continue the war. Their efforts failed against the opposition of many senior leaders, who General Anami had told to obey the Emperor’s command. Anami then killed himself in the early hours of August 15.

At noon on August 15, Hirohito’s recording sounded out over Japan. Most of his people had never heard his voice before, but his words were clear. Japan was giving in.

Celebrations erupted all over the United States and among all American personnel. Many felt a sense of deliverance from a terrible fate in the invasion of Japan. Sergeant John A. Steffen of Elroy, in Europe but on the troop list for CORONET, spoke for many when he observed “the bomb saved my life.” Allied prisoners of war, some of whom had seen and heard the Nagasaki bombing, no longer had to work or bow to Japanese guards. Instead, the Japanese bowed to the prisoners.

World War II was over.

Your ticket for: Part V: THE END OF THE WAR