On the afternoon of July 1, 1863, the 7th Wisconsin played a pivotal role as the rear guard of the Union Army during the retreat through the town of Gettysburg. Though the regiment held their position as long as possible along a rail fence barricade on the slopes of Seminary Ridge, outflanked and hopelessly outnumbered, they ultimately withdrew into town. As Colonel Robinson, commanding the regiment, reported:

“It was here I met with the heaviest losses from the regiment during the day . . . Sergt. Daniel McDermott, color-bearer, was severely wounded just as we were entering the town by a charge of grape and canister, the same charge shivering the flag-staff into a number of pieces. McDermott was placed upon a caisson that was moving ahead of us, still hanging to the tattered banner, which he waved in defiance at the foe as he rode off.”

When the regiment arrived at their new positions south of town, the color guard cut a small limb from an oak tree to replace their shattered flagstaff. Over one hundred years later, when the flag was unrolled to be conserved here at the museum, the flag was still mounted to that very same oak limb. 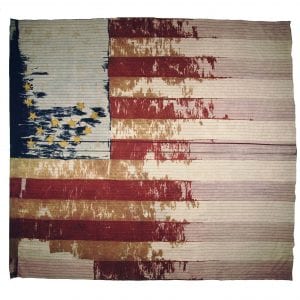 Your ticket for: Rearguard at Gettysburg