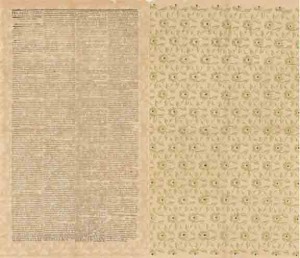 The use of wallpaper as a substitute for newsprint was a common occurrence for some printers in Louisiana and Mississippi during the Civil War. Most paper mills were in the North, and printers in those regions looked to wallpaper as an alternative to dwindling paper supplies as the war dragged on. The most famous of these wallpaper editions to come from the war was The Daily Citizen of Vicksburg, Mississippi. The editor of the paper, J. M. Swords, began printing on wallpaper after his newsprint supplies ran out as a result of the siege that began on May 18, 1863. When Confederate forces surrendered on July 4, Union soldiers occupying the town found the type still set from the last edition ran two days earlier. An unknown soldier with typesetting skills added the following note to the end of the edition.

Two days bring about great changes, The banner of the Union floats over Vicksburg. Gen. Grant has “caught the rabbit:” he has dined in Vicksburg, and he did bring his dinner with him. The “Citizen” lives to see it. For the last time it appears on “Wall-paper.” No more will it eulogize the luxury of mule-meat and fricassed kitten — urge Southern warriors to such diet never-more. This is the last wall-paper edition, and is, excepting this note, from the types as we found them. It will be valuable hereafter as a curiosity. 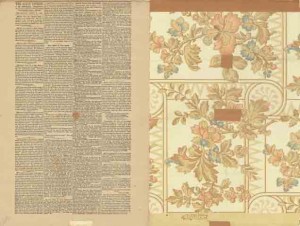 Front and back of one of several reproductions that are part of the holdings of the WVM. (WVM Mss 1528)

After adding the note, the press was started and issues were run. An unknown number were printed before someone noticed the misspelling of CTIIZEN in the title. The press was stopped and the correction was made, but other mistakes were allowed to stand. The WVM Research Center has one copy of the original edition printed by Union soldiers. It was identified as an original from a guideline put out by the Library of Congress, which evaluates misprints, misspellings, and the pattern of the wallpaper to determine authenticity. A handwritten note on the paper indicates it likely came from the Veterans Home at King, and was likely picked up by a Wisconsin soldier who was present during the siege.

The statement that they “…be valuable hereafter as a curiosity” became reality, as numerous veterans after the war sought copies as souvenirs. They became so popular that numerous reproductions were done, with early ones likely handed out at G.A.R. reunions and other gatherings. The WVM Research Center has several copies of these reproductions in its holdings, with most of them likely added to the collection when the museum was the G.A.R. Memorial Hall. Despite being reproductions, these copies do show how popular the Vicksburg wallpaper newspaper edition had become after the war.  Search the WVM Research Center collections at https://bit.ly/1rD3iqX.

Your ticket for: The Archivist Chronicles: A Union Addition by Andrew Baraniak