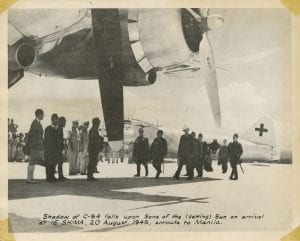 Four days after Emperor Hirohito’s broadcast, a delegation of Japanese officials flew via Ie Shima to the Philippines to receive instructions about putting the surrender info effect. General Douglas MacArthur would govern Japan as Supreme Commander for the Allied Powers. On August 30 he flew to still-armed Japan in an unarmed transport.

At 9 AM on September 2, 1945, General MacArthur presided over a public surrender ceremony aboard USS Missouri anchored in Tokyo Bay.

“We are gathered here,” he announced, “representatives of the major warring powers, to conclude a solemn agreement whereby peace may be restored. The issues, involving divergent ideals and ideologies, have been determined on the battlefields and hence are not for our discussion or debate . . . It is my earnest hope, and indeed the hope of all mankind, that a better world shall emerge out of the blood and carnage of the past.”

From 1945 to 1951, General MacArthur and his headquarters set about reforming Japan into a modern democratic state. Emperor Hirohito and the Japanese government assisted in these efforts, which liberalized the society, broke the militarists’ power, and reformed the economy. War criminals stood trial, and the military was abolished in a new constitution that MacArthur’s staff drafted. Unamended since its adoption in 1947, that constitution governs Japan today.

In losing the war, Japan also lost her empire. Southern Sakhalin Island and the Kuriles fell under Russian control, while the United States gained administration of Japan’s holdings in the Central Pacific, most notably the Marshall and Mariana Islands. Formosa (Taiwan) returned to China, which took the opportunity to claim some nearby islands. Okinawa became a U.S. protectorate until 1972. Korea also gained its independence, but was divided administratively at the 38th Parallel.

The surrender in Tokyo Bay started a series of local surrenders of Japanese forces around the Pacific. In Southeast Asia, war’s end created openings for independence movements, many based around former Japanese puppet government leaders, to take hold. New wars broke out as colonial powers tried to reassert their control. Indonesia won its independence from the Dutch in 1949, while French Indochina started three decades of conflict ending only in Saigon’s fall to North Vietnam in 1975. Malaya (Malaysia) and Singapore became sovereign nations after winning a guerrilla war known as the Malayan Emergency. In British India, trials of pro-Japanese officers stoked ethnic divisions and anti-British feeling, leading to Britain partitioning the land into India and Pakistan on August 15, 1947.

Elsewhere colonial powers exited the scene more peacefully. The United States granted the Philippines its independence on July 4, 1946. U.S. bases remained on the islands until 1991. Britain ceded independence to Burma (Myanmar) and Ceylon (Sri Lanka) in 1948.

While these changes occurred, in China Chiang Kai-shek’s Nationalists and Mao Zedong’s Communists started a Civil War for control of the country. Nationalist corruption and military failures weakened Chiang’s hold on the population, and in 1949 he and his government fled to Taiwan. In Peking (Beijing), Mao proclaimed the People’s Republic of China on October 1, 1949. The last Nationalist troops left mainland China in spring 1950.

This reordering of postwar Asia occurred in the context of the developing Cold War between the United States and the Soviet Union. From 1947 to 1991, both sides engaged in a standoff in the Bering Sea, the North Pacific, and Northeast Asia. The conflict flared up on June 25, 1950, with the Korean War’s outbreak; after three years of battle, both sides concluded an armistice on July 27, 1953. The war has never ended, as a formal peace treaty has not been signed.

Virtually all of the conflicts in Asia over the past 75 years are rooted in World War II and its aftermath. Many remain active today. India and Pakistan maintain tense relations, and have fought four wars since 1947. Korea remains divided, while Japan and Russia still dispute ownership of the Kurile Islands. The People’s Republic of China and Taiwan remain at odds, while the South China Sea is a focus of territorial disputes among many nations. Defeat of Japan may have ended World War II, but it also carried the seeds of future geopolitical conflict in Asia that are still present today.

Your ticket for: Victory in the Pacific Part VI: A Better World Shall Emerge