On March 29, 1973, the last US combat troops were withdrawn from Vietnam, and the last prisoners of war held in North Vietnam returned to American soil. Since then, Vietnam Veterans Day has been established to welcome home Vietnam veterans, acknowledge their service and remember the men and women who died during the Vietnam War. In recognition of Vietnam Veterans Day, Wisconsin Veterans Museum staff have gathered a few of the many stories of Vietnam veterans here at the Museum. 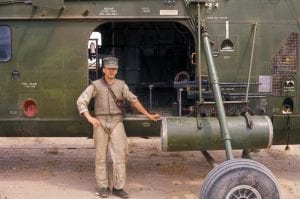 Teddy L. Duckworth, a Mauston, Wisconsin resident, served as a helicopter mechanic with the Marine Corps during the Vietnam War. Duckworth served two tours of duty in Vietnam between 1961 and 1966, and was shot down three times during his second tour. During his time in Vietnam, Duckworth tried to keep from his family that he had been shot down, but they eventually found out through another source. In a letter, dated November 28, 1965, Duckworth tells his family:

Well, I guess you know now. It’s like the old saying goes: what you don’t know doesn’t hurt you.

After his service, Duckworth returned to Wisconsin, living in New Lisbon and became a longtime member of the Wisconsin Veterans Museum Foundation. He passed away December 29, 2017. 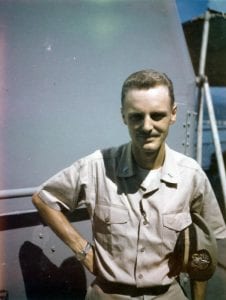 William H. Murphy III, a Madison, Wisconsin resident served with the Navy in Vietnam and was killed in action on November 19, 1967. In a letter home shortly before his death, Murphy wrote:

I just returned from a 4 day excursion with the 1st Squadron, 9th Cavalry, 1st Air Cavalry. During that time, I got to ride as a door gunner on 4 combat missions. In addition, I have fired my first shot in anger.

After he was killed, his mother received many condolences including these:

It is with a deepest sympathy that I write to you concerning Bill, our departed shipmate, who served the Navy and his country with distinction and honor. I hope you will accept my condolences on the death of your son. [ . . ] Your son was serving as a door gunner on a rocket helicopter that sighted about ten North Vietnamese Army troops on the ground. The pilot immediately initiated a rocket attack while Bill was furiously shooting the enemy. During the course of the rocket run, the enemy shot the aircraft down and your son died instantly upon impact without pain or suffering. [ . . .] 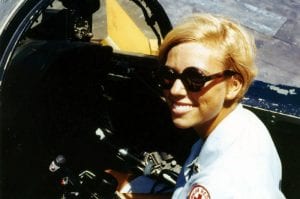 Jeanne M. Christie, a Madison, Wisconsin native, joined the American Red Cross in 1967 and served in Vietnam as part of the Supplemental Recreational Activities Overseas (S.R.A.O.) unit, which oversaw recreational activities at bases and occasionally visited troops in the field. Known as the “Donut Dollies,” the women in the SRAO units tried to bring comfort and “a touch of home in a combat zone” to the soldiers in the field. Between January 1967 and February 1968, Christie (nicknamed “Sam”) was stationed with the 1st Logistical Command in Nha Trang (February 12 to June 9, 1967), the 1st Marine Division in Danang (July 9 to September 27, 1967) and the 35th Technical Fighter Wing in Phan Rang. After her time in Vietnam, Christie served at the Great Lakes Naval Hospital from March 1968 to August 1969.

In a letter describing her activities with the Red Cross, Jeanne wrote:

Several times a week we visit the hospitals and either chat with the troops, or program them, depending on their condition. This is one of the most disheartening and yet moral boosting jobs for me. Just this past Monday, we went over to the big N.S.A. hospital and what a sight we saw! Some of the guys had just been moved from the intensive care ward prior to being moved out (home), within the hour. We see fellows with their arms and legs blown off, their heads smashed in and pieced together, eyes lost and hearts completely broken. Surprisingly enough, without sounding like a Clara Barton, the biggest lift we can give them is a human, female hand and some cheerful words like “Hi! How are you doing today?”. You know. That they feel like Hell and then some but its an American, a real live walking, talking girl. Its amazing to see them perk up and for some it’s a feeble attempt to move an arm or even talk.

After her service, Christie returned to school and earned a PhD. in Educational Leadership. She has served as a White House Advisor on Women’s Health on behalf of civilian women serving in Vietnam and as a consultant on the television program China Beach. Later, she was a lecturer at Manhattanville College and Western Connecticut State University. 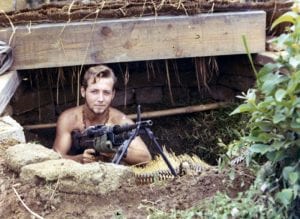 Edward J. Beauchamp, was born in 1949 in Milwaukee, Wisconsin, entering service to the Army in 1969. Beauchamp completed his service and was discharged in 1971 after spending 11 months and 20 days in Vietnam. Later, Beauchamp returned to Wisconsin to work for Wisconsin Gas, married, and had two children. Beauchamp became involved in many veterans organizations, and his involvement had several focuses: the planning, funding, and building of the Vietnam Veterans Memorial in Milwaukee, raising awareness of POW and MIA servicemen, and garnering recognition for Vietnam War veterans.

Through the work of Beauchamp and others, the Vietnam Veterans Memorial was established on the Milwaukee lakefront in Veterans Park. The three granite columns represent those killed in action, POW/MIAs, and those who returned home. 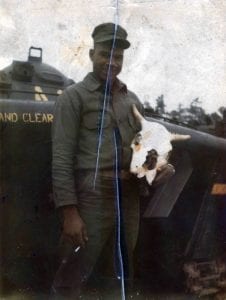 Jon E. Smith, a Chicago, Illinois resident, served with Company A, 5th Amphibious Tractor Battalion during the Vietnam War. Smith had been a professional baseball player before joining the Marine Corps with a friend.

No mail today. Sat on B-48 and listened to ballgame. Foster, Freeman, Foisy + I went to the club it was closed. We were made litter bearers. All sorts of dudes were fucked up. Took of [sic] litter bearer and put on guard. Along with Lowe, we were replaced by Foisy and Sweat Pea. We had incoming tonight. A few rounds landed in the C.P. and killed Seebode and Dulik. Harlett and Fetz were wounded. B-40 came in out of the field and Ssgrt. Barta and Beehee were also wounded. Tonight was a very long and horrible one.

Bersch and I looked for bomb craters from last nights incoming. Chaplain came over and told us about services for Seebode and Dulik. Foisy and Sweet Pea found out about last night. Had mail today, got letters from: My moms [sic], 3 from my wife and one from Helen Brandon. Had guard again today. Freeman and I were on machine gun hole. We heard fire fights all night long.

After his service, Smith returned to Chicago and his baseball career until the age of forty, eventually settling in Madison, Wisconsin. 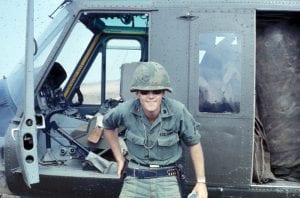 Rick Berry, a Connecticut native, served in the Vietnam War between May of 1967 and May of 1968 and flew Huey helicopters for the First Cavalry Division as a Warrant Officer.

After seven semesters of college, Berry elected to enlist in the US Military instead of remaining in school.  In the fall of 1965, Rick joined a warrant officer program offered by the Army where he was trained to fly Huey helicopters.  He received basic training at Fort Polk, Louisiana and attended his Warrant Officer Rotary Wing Aviation Course in Fort Wolters, Texas.  Berry then completed advanced training by earning his Tactical Instrument Ticket at Fort Ruckers in Alabama.  Berry flew primarily the Bell UH-1 Iroquois helicopter or “Huey” while at Fort Ruckers.

Then in 1967 after taking a month’s leave, Berry deployed to Ankei, Vietnam as a member of A Company, 1st Cavalry Division, US Army.  He served in Vietnam between May of 1967 and May of 1968, participated in Operation PERSHING and flew missions in Khe Sanh.  Upon arrival in May of 1967, Berry flew 229 hours of flight time over the course of fifty days.  He mainly flew missions in which he transported ground soldiers in and out of Landing Zones.  For his R&R time, Berry chose to go to Sydney, Australia.  After leaving Vietnam, he requested to be stationed in Germany.  While there, he met his wife, who worked as a civilian recreation director for one of the service clubs on base.  Berry was discharged from the army in December of 1969.

In his Oral History, Berry discussed his service in the Army and specifically in Vietnam:

Well in the first place, I joined the service knowing that I was going to be flying a helicopter in Vietnam, so it didn’t come as a surprise to me, and to tell you the honest truth I found it fun. Um, the flying was fun. The fact that you learned to fly the aircraft kinda to the edge of what it was capable of was fun. The formation flying was a kick, that’s all there was to it. [. . .] So, I think the experience I had in the service, in general, probably a large part the experience in Vietnam, made a much better person out of me. I guess I would describe myself as on the edge of a punk when I went in the [laughs]— [. . .] —the army. I certainly squandered my parents’ money and school the first time, and just partied rather than studying and so forth. Um, so my experience in the service is all good.

Also from his Oral History, when reflecting on the Vietnam War in general:

Well, I studied a little bit about it afterwards. Essentially had no knowledge whatsoever of the political aspect of it before I went to Vietnam. I’m proud I went to Vietnam. I’m proud of what I did in Vietnam. I guess after studying it, I’m not at all certain the country should have been there. I’ve learned a little bit about Ho Chi Minh, and think Ho Chi Minh was more much interested in reunifying his country than he was in expanding communism around. As a matter of fact, if you look at the, ah, the Declaration of Independence that Ho Chi Minh wrote for North Vietnam, you’d think you were reading our Declaration of Independence.

After discharge, Berry received a bachelor’s degree in Biology and a Master’s degree in Zoology and Ecology.  He has worked for the US Army Corps of Engineers, Fish and Wildlife Service, and National Wildlife Refuge System, and finally, he worked on the Wetlands Restoration Program in Wisconsin.  Berry and his wife reside in Madison, Wisconsin.

Your ticket for: Vietnam Veterans Day