Just as servicemen and women often befriend one another, war dogs and their handlers often share a deep bond from their experiences in combat. James Hooker, a Wisconsin veteran of the United States Marine Corps, spent three full tours of service in Vietnam. A young man “tired of school” and “brainwashed by John Wayne movies,” Hooker enlisted in the Marine Corps in 1966, hoping to join in the war. While at Camp Lejeune completing additional training, Hooker volunteered for training as a scout dog handler at Fort Benning, Georgia. After sixteen weeks of training, ten handlers and their dogs, including Hooker and his scout, London, volunteered to go to Vietnam.

London, a German shepherd, worked with Hooker as the “point-man.” In a tactical formation, the “point man” holds the most vulnerable position. Hooker would walk with London and, using silent signals, the dog alerted his handler to enemy movement, booby traps, mines, base camps, and underground tunnel complexes and supplies.

In an oral history interview Hooker described an instance in which London came through in the face of doubt and serious danger. Click the image below to hear Hooker’s telling of the intense experience:

My dog alerting on an enemy bunker complex about a thousand yards away from the bunker complex, gave us plenty of warning, and that was only because the wind was blowing just right, and the dog picked up the scent of all the enemy up on the ridge line and…the officer that was with us kept saying that that dog isn’t good, that dog isn’t good, and when we got up near the ridge and he found out that the whole ridge line was covered with Vietcong, North Vietnamese bunkers, he wanted to hug my dog. I wouldn’t let him do it. The only one that got to hug my dog was me. 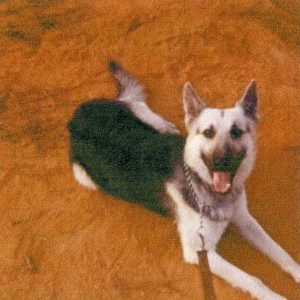 Instances like this are why scout dogs and their handlers are credited with saving 10,000 lives during the Vietnam War. However, when US troops left Vietnam in 1975, the heroic war dogs stayed behind. Deemed “equipment” the scout, tracking, and guard dogs were left in the possession of the South Vietnamese Army. 4,000 dogs served in Vietnam and only 200 returned home to the United States. Many of those left behind were euthanized.

In order to prevent such an event from happening again, veterans have advocated for the legal adoption of war dogs. Dr. William Putney, a World War II Marine veteran, war dog platoon leader and veterinarian, along with Congressman Roscoe Bartlett of Maryland successfully passed legislature dubbed “Robby’s Law” in 2000, allowing war dogs like London to be adopted after service.

When asked what he did for good luck while in Vietnam, Hooker replied, “Actually, the only thing I did was take my dog by his jowls and just scratch under his ears. That was my good luck thing.”

Your ticket for: “Walking Point with London” by Kylee Sekosy