While serving aboard a landing craft (USS LCI (L)-23) in the Solomon Islands during World War II, William Stark of Waukesha was saved by what he must have believed was partly “divine intervention.”

In 1943, when his landing craft beached to unload, Motor Machinist’s Mate Second Class William Stark was at his station as a gun captain of an anti-aircraft gun at the stern of the ship. Hearing the roar of the engine of a Japanese dive-bomber directly above him, Stark looked as “almost simultaneously an explosion just a few feet off the stern drove mud, rocks, and seaweed high into the air. I remember the feeling of compression all over my body.” Crediting his helmet and ear protection with saving at least his hearing, Stark suffered internal injuries and never truly fully recovered, and hardly able to remember anything for the next few months after that. 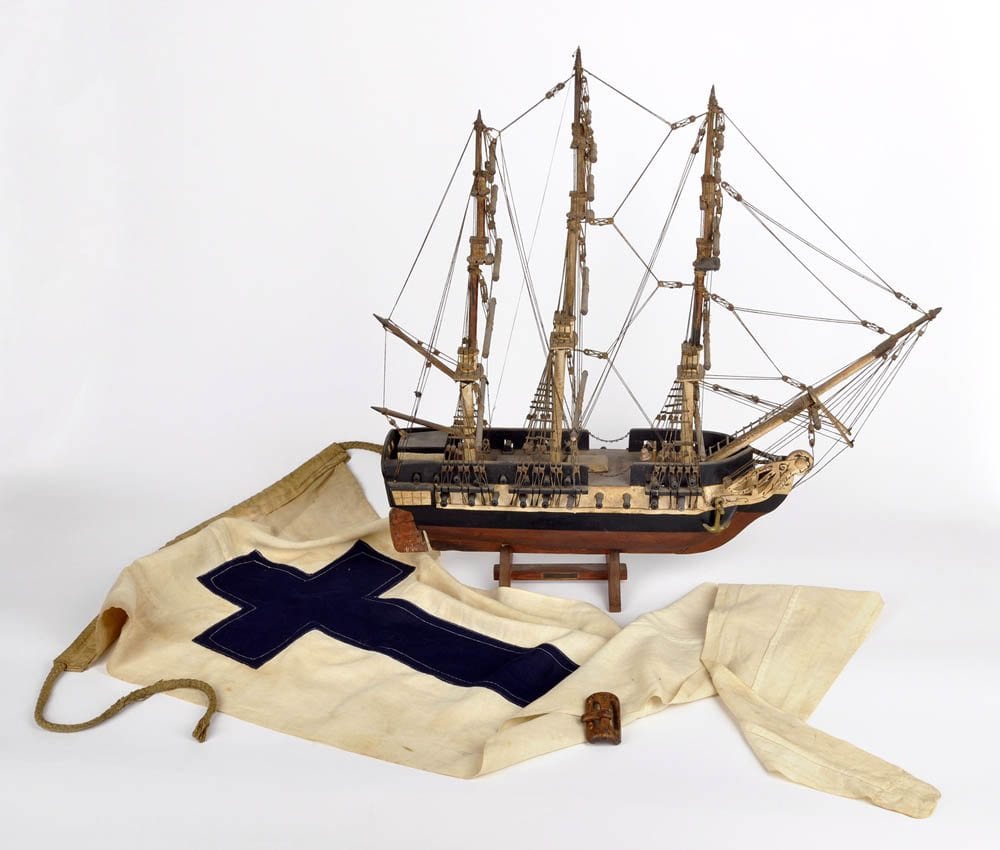 William Stark passed his time recovering in the hospital hand-making models of the USS Constitution. He traded tobacco with a maintenance man for the tools and supplies to build them. Earlier in his service, Stark carved a belt buckle out of the stock of a Japanese rifle that he had received from a wounded marine aboard his landing craft. V2017.071

After recovering as much as possible in a convalescent hospital, Stark was discharged and returned home in 1944 where he was reunited with his sea bag. Having not seen it since before the explosion, he unpacked the contents and came across a long-forgotten pennant that perhaps was part of the reason his life was spared that day the year before.

Stark recalled that a few months before the attack he had witnessed six of his crewmembers request permission from their skipper to attend Mass. A nearby landing craft had raised the church pennant signifying a chaplain was aboard. After a heated exchange, the captain being adamantly opposed to religious services, they were allowed to attend. Still fuming, the captain shouted, “Stark! Get up here!” The captain dug through their own flag bag, pulled out the church pennant, handed it to Stark, and said, “wrap it around something heavy, stop it [tie it] well, then heave it as far as you can off the fan tail [stern]. I don’t want that on this ship.”

Unwilling to desecrate the pennant but not wanting to disobey orders, Stark hurried away to the forward deckhouse at the bow of the ship, and climbed down into the chain locker where the crew’s baggage was stowed. Finding his sea bag, he stuffed the pennant inside a pant leg of his dress blues, packed it all away again, and went back topside. Not long after, the captain found Stark and confronted him, asking for reassurance that the orders to “deep six” the pennant were carried out. Not lying, Stark reported that “no one will ever find it.”

Your ticket for: William Stark and the Church Pennant