When the United States entered WWI, sheet music was very popular on the home front and a new form of pop music called “jazz” was beginning to emerge.  Families, neighbors, and friends would gather around pianos to sing their favorite tunes popularized by larger-than-life vocal stars. The Wisconsin Veterans Museum has many examples of WWI sheet music, each with elaborate colorful covers. 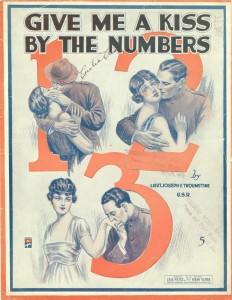 Much of the sheet music of the time reflected patriotic themes like, “America He’s For You!”

“There’s a baby in the cradle

And as soon as he is able

America he’s for you!”

Other songs reflect anxieties families felt with their soldiers away at war, like “Send Back Dear Daddy to Me” featuring a young girl staring longingly at a photograph of her father in uniform.

WWI was a period of social change, increasingly couples began marrying solely for love and women gained some independence. These social shifts are reflected in titles like “If He Can Fight Like He Can Love Good Night, Germany!” with risqué lyrics:

All the girls said “Ain’t he nice and tall,”

Mary answered “Yes, and that’s not all.” 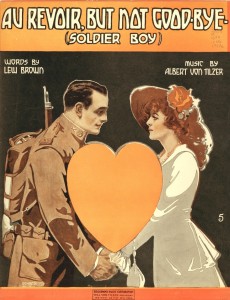 The sheet music of WWI offers a unique look at the consciousness of the United States as it went through social changes and began to emerge as a major world power.

Interested in viewing the Museum’s collection of sheet music? Schedule your  appointment today!

Your ticket for: WWI Sheet Music by Laura Farley