I AM NOT INVISIBLE 3.0: WOMEN VETERANS TELL THEIR STORIES 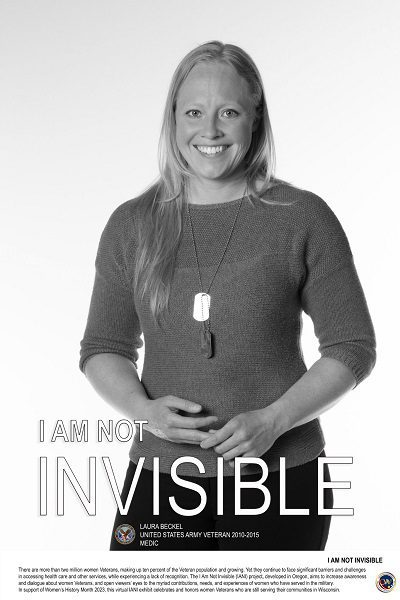 The Wisconsin I Am Not Invisible (IANI) women's veterans oral history project kicked off on June 9, 2022, following a two-year hiatus due to the Covid-19 Pandemic. The I Am Not Invisible Project is an annual effort to photograph and interview women veterans. Click here for the current project website: https://wisvetsmuseum.com/oral-histories/featured-interviews/i-am-not-invisible/. Unfortunately, due to the Covid pandemic, the second project was postponed. The Wisconsin IANI team agreed that this new series of interviews would be called IANI 3.0.

This project is made possible through a team effort. First, Yolanda Medina and James “Groovy” M. Cocroft of the Military & Veterans Resource Center of the University of Wisconsin Milwaukee provide leadership and space. Next, Gene Russell with the United States Department of Veterans Affairs photographs the veterans. Finally, Luke Sprague and the Oral History Team at the Wisconsin Veterans Museum-Wisconsin Department of Veterans Affairs interview the veterans.

Today, we feature some extracts from one of our audio-only interviews with one of our IANI 3.0 veterans, Laura Beckel. Beckel served in the Wisconsin Army National Guard from 2010 to 2015 with the 135th Medical Company in Waukesha, Wisconsin. She sensed that she needed to help others to make the world a better place, had a need to contribute to the country, and felt that military service was the way to do it. Although initially entering the Army from Keenesburg, Colorado, Beckel later wanted to explore other parts of the United States and chose to move to Wisconsin, where she's remained since.

She had some interesting experiences at basic training, including attending a Kid Rock concert and at Advanced Individual Training (AIT) guarding a barracks with broomsticks. At basic training graduation, her younger brother, featured in the photograph here, got to meet Beckel's drill sergeant and learned about doing push-ups.

Brother Timothy in his ACUs at my basic graduation. WVM.OH2238. 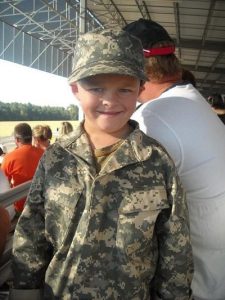 Brother Timothy in his ACUs at my basic graduation. WVM.OH2238.

BECKEL: Well, one cool one was at graduation. My parents and my youngest brother came out to watch. My youngest brother Timmy was four, and on family day took him to the PX and I got him a set of ACUs, so he [Sprague laughs]. So you know, little bitty kid's ACUs and he wore them to my graduation and the post commander was there and saw him walking around and went up to him because he was just a little guy wearing ACUs, shook his hand and gave him a coin--

BECKEL: Four years old, gave him a coin, after, you know, the ceremony, he comes running up to me, "Laura, Laura, Laura, look what I got, look what I got and shows me the coin and I'm like that really really cool. I'm like I want you to come show to this to drill sergeant Tucker. Like this is pretty cool. And wanted to introduce him to drill sergeant Tucker. Gave him the coin, showed it to him, and look at this, he goes "That's really cool, do you want it back?" Like "Yeah" He's like "You're goin' to have to give me twenty push-ups if you want this back." [Sprague laughs] He looks at me and he's so scared he was nervous to go up to talk to him to begin with. He's like, "I don't wanna," I'm like "No, let's go show him, come on." He's like you gotta do the pushups, "I can't," "Okay, I'll get down and we'll do twenty pushups together and you can get your coin back." "Okay." So we got down and did twenty pushups and he got his coin back.

With plans for a future in the medical profession, Beckel decided she wanted to be an Army combat medic (68W) and attended AIT at Ft. Sam Houston in San Antonio, Texas. The sixteen-week advanced training included certification as a nationally registered basic EMT for the first eight weeks, followed by combat medic training. Beckel explains that combat medic training has no civilian equivalent.

Completing AIT meant completing “trauma” lanes, passing difficult written exams, and a realistic field training exercise that included full medical evac of simulated casualties with helicopters. Each individual unit has its own particular standards in terms of what medical procedures it lets its combat medics perform depending on the physician assistant’s (PA) decision to train or not train the combat medics in a task. 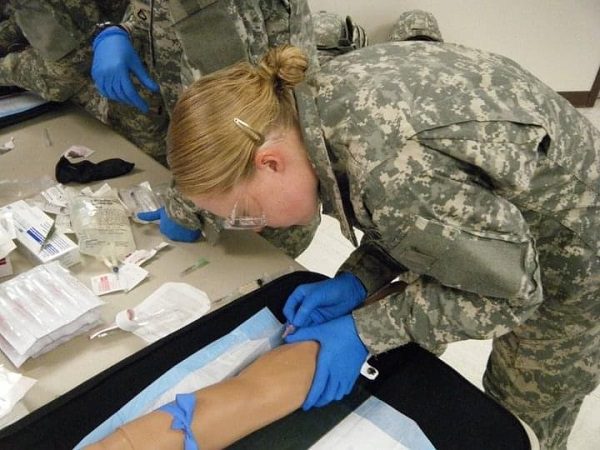 BECKEL: Very different, there is no licensing equivalent of combat medic to civilian side, whereas we are taught to do anything that's going to save a life in a combat situation something happens so whether that's chest tubes or intubating you know. Crike, a cricothyrotomy. You know all stuff that in civilian life only a doctor is going to do or a PhD. Basically, a combat medic your scope of practice is whatever your physican's assistant or whoever is above you is going to teach you. So, in training you know, they teach you how to sutures, the chest tubes, and the crikes and that kind of immediate life saving stuff. Cause it could be a very very long time before that patient gets to a hospital, you know if you are waiting for that doctor to be able to do that, probably not a very high chance. But once you get to a unit, you're PA teaches you to do some kind of surgery, then that is your scope of work, you can do that. Civilian side you'd be in a lot of trouble for doing something outside of your scope of work.

Family and the military go hand in hand for Beckel, and she explains that the Wisconsin National Guard is part of her extended family of brothers and sisters. “We’ve got each other’s backs,” Beckel explained in the pre-interview call. 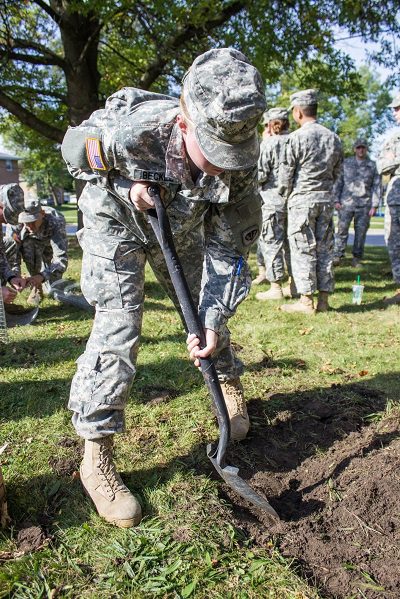 [Beckel] Digging to plant a tree at our armory in dedication to SSG [Tim] Touchett after he passed away. WVM.OH2238. 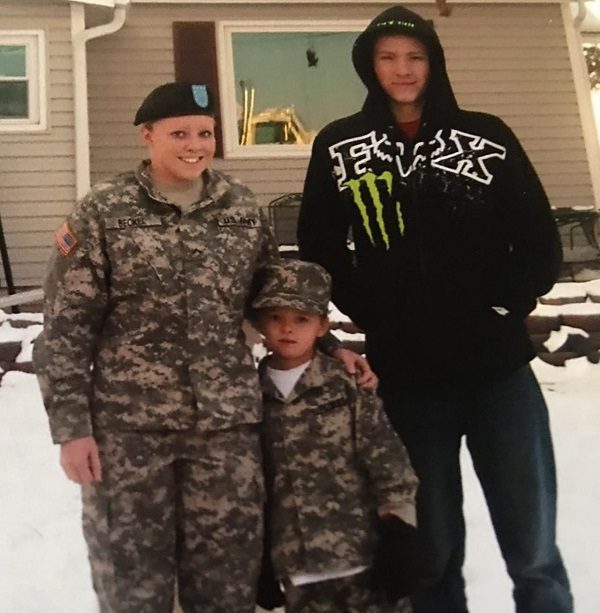 Both of my brothers, after coming home from AIT. WVM.OH2238.

The military as a family

In closing, Beckel continues to serve veterans in her work as a cemetery technician at Wood National Cemetery in Milwaukee, Wisconsin. Navy Seaman Second Class Arthur R. Thinnes served on board the USS Oklahoma the morning of the attack on Pearl Harbor, December 7, 1941. He was killed during the attack and remained unidentified until 2021. Last fall, almost eighty years later, following his DNA identification, Thinnes was laid to rest at Wood National Cemetery; Beckel was at the military funeral and observed:

Beckel: Younger people I am talking with never even met him, but it was their mom’s brother you know that was missing their entire life and heard about him forever and ever and ever. He is their family, they never knew him, but they still felt that grief, just as—patriot choppers came for him, you know, met him at the airport when he flew, I mean it was just a pretty--I guess strong emotional day for a lot of stuff.

For the complete interview, please click here or on the image below: 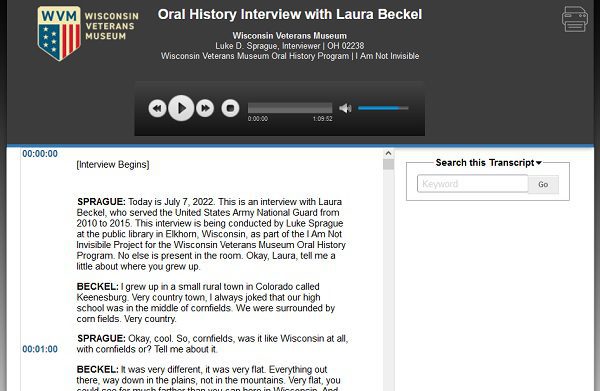 Your ticket for: I AM NOT INVISIBLE 3.0: WOMEN VETERANS TELL THEIR STORIES

I AM NOT INVISIBLE 3.0: WOMEN VETERANS TELL THEIR STORIES