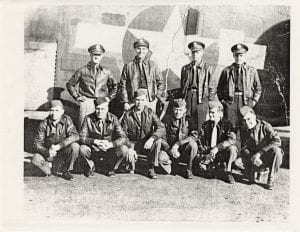 Leonard Schutta's crew. Schutta is kneeling in the front row on the left. 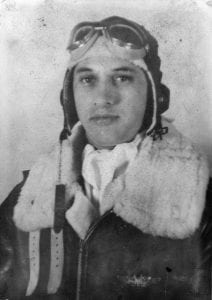 In the early morning hours of 6 June 1944 off the coast of Normandy, France, on a stretch of coast forever immortalized that day with the name of Omaha, roughly 34,250 US soldiers aboard hundreds of landing craft and naval vessels of all sizes waited for H-hour, the time designated for the assault to begin.

Milwaukee’s Leonard Schutta was aboard one of the nearly 500 B-24 Liberator bombers of the 8th Air Force en route to their targets in the Omaha beach area. At 0555 the bombers reached the target zone and prepared to deliver their 13,000 bombs. At 15,000 feet the bombers were out of range of enemy antiaircraft fire, but also above a thick layer of cloud cover that obscured the bombardiers’ views of not only their intended targets, but also the friendly forces down below. To avoid any possible major friendly-fire disaster with the thousands of US forces below them approaching those exact same target zones, the plan was to wait an extra 30 seconds once the bombers located their targets, before releasing their payloads.

Though the caution was warranted, this meant that many of this portion of the preparatory bombardment prior to the landings missed their targets, dropping their bombs too far inland or, in the case of 100 of the 500 bombers, never dropped their payloads at all since their targets couldn’t be located. Schutta’s B-24, later nicknamed the Normandy Queen, was the lead bomber in its section and by all reports found their target, a group of gun batteries on the eastern most edge of Omaha Beach at Port-en-Bassin.

Your ticket for the: Overhead at Omaha Beach with D-Day Flier Leonard Schutta