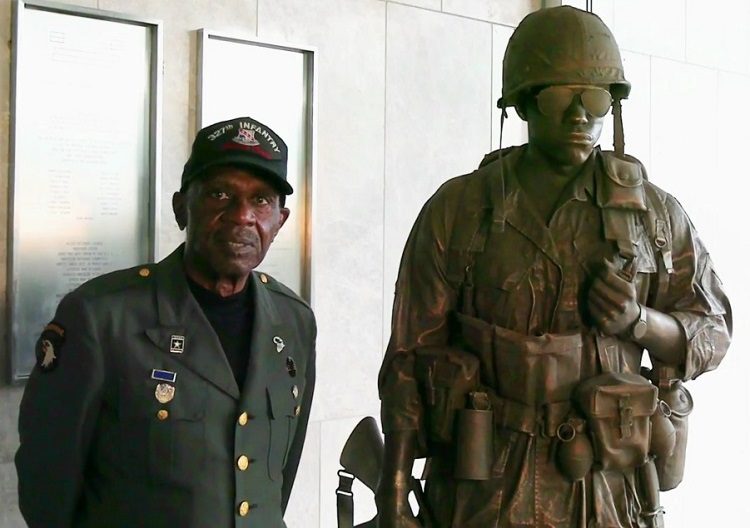 William Sims standing next to his statue at the War Memorial Center in Milwaukee, Wisconsin. WVM.OH2222.

William L. Sims calm smile and collected manner belies a man whose herculean efforts empowering veterans in Wisconsin are almost without equal. He continues shaping veterans organizations, mentoring fellow veterans, and implementing programs. There is a reason why Sims has a statue featured on the main floor of the War Memorial Center in Milwaukee, he earned it.

In November of 1990, the then-director of the Wisconsin Veterans Museum (WVM) Dr. Richard Zeitlin asked Thomas H. Wynn, Sr., executive director of the National Association for Black Veterans (NABV), for recommendations for African American veterans who distinguished themselves in service. He selected William Sims. The following spring, March 1991, Sims’ full-scale sculpture was one of twelve statues delivered to the Wisconsin Veterans Museum honoring Wisconsin veterans. In 2021, the Sims’ statue was put on long-term loan to the War Memorial Center, in Milwaukee, Wisconsin.

Two years after his return from Vietnam and honorable discharge in 1967, Sims began his lifelong career serving veterans in earnest. While in Vietnam, Sims served as point man in the 2nd Battalion, 327th Infantry, 101st Airborne Division. He was wounded in action and received the Bronze Star with the “V” for valor device. In honor of African American history month, we recognize William L. Sims who not only stood at the intersection of African Americans, military service, and Wisconsin, but continues to serve Wisconsin veterans to this day. 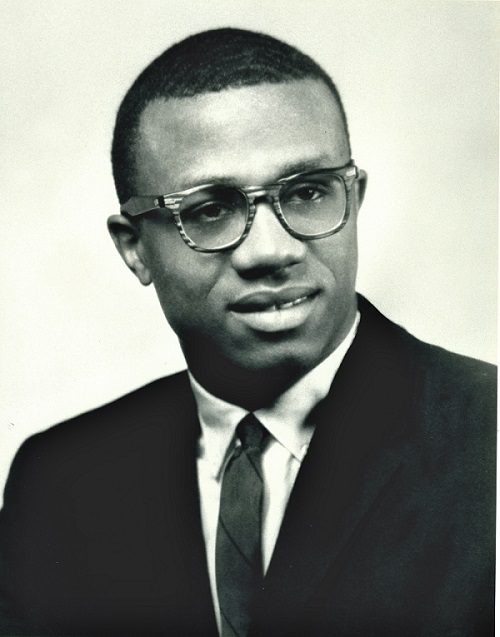 In 1969, Sims’ career serving veterans began as benefits counselor with the Interested Veterans of the Central City (IVOCC), established to address what Sims saw as a lack of concern for minority veterans by the establishment. Soon after, IVOCC turned into the National Association for Black Veterans (NABV) focused on a set of tangible goals that assisted veterans with issues that they faced post-Vietnam. In Milwaukee during the Vietnam War, a nucleus of African American veterans formed in and around NABV and similarly minded veteran organizations who sought to get veterans back on their feet and independent.

NABV is a national organization with chapters throughout the United States and Sims served as vice chairman on the NABV National Command Council. Sims also held the post of layout editor and provided artwork for the Eclipse, the official publication of NABV. The Eclipse was published first as a monthly newspaper and later a glossy magazine. The Wisconsin Veterans Museum has archival materials available for research.

A photo of an Eclipse masthead. WVM P33.

In the Vietnam Era and to this day, Sims works to insure African American veterans receive the same benefits as other veterans and are not discriminated against.

Sims’ list of veterans organizations that he has worked with is quite extensive and these are just some highlights. In 1990, William Sims received the Congressional Black Caucus Veteran’s Braintrust Award established by General Colin Powell that recognized outstanding service to African American veterans on a national and community level.

Sims saw minority veterans overrepresented in the homeless population of Milwaukee and decided to work as an outreach specialist for the Milwaukee Homeless Veterans Reintegration Project (HVRP). He also worked at the Veterans Administration (VA) and the Wisconsin Department of Veterans Affairs (WDVA).

Sims’ focus is mentoring veterans while empowering them to help themselves. His approach does not stop with traditional veteran service organizations but extends into an organic therapy program for veterans. This program teaches veterans to garden vegetables and has been found to reduce stress in some veterans. He has also used a radio station to get relevant information to veterans.

The story behind the sunglasses on the statue

Chess clocks at the VA

>> To watch, listen, read, or research the complete interview click on the image below: 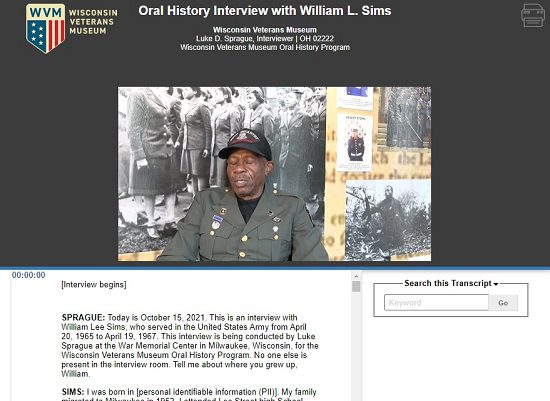 Your ticket for the: William L. Sims: A Lifetime of Service