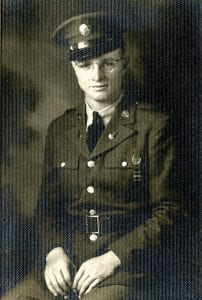 Wilbur Berget, a farmer from Gratiot, served in the 12th Armored Division in France in November 1944 and voted absentee. Read below part of his letter home on the subject.

World War II brought changes to many aspects of the United States military. The sheer scale of the conflict forced government leaders and military officials to seek new and different ways to carry out the war effort, from equipment and arms to tactics and strategy. Military voting was also among the areas that required innovation and a new approach.

The Civil War marked the first time in American history that service people could vote in an election while serving far from home. While it was not a perfect system, it worked for the time and the general processes remained in place for over 50 years.

When the United States entered World War I in 1917, it quickly became apparent that changes to how soldiers vote would be needed. Unlike in the Civil War, when men generally served in units made up of others from their home state, World War I saw units that were true mixtures of men and women from every state in the Union. This made the administration of a vote in the field much more difficult. In addition, the military began censoring mail sent by service people, which would include ballots. But most states would not accept a mailed ballot that had been opened by an officer. World War I ended before many of these issues had been solved.

Through the beginning of World War II, military voting, particularly for men and women serving overseas, continued to slow and inefficient due to outdated state laws. The 1942 election seemed to highlight how difficult it was for a person in the active military to request a ballot, receive it, and return it in time for it to be counted.

In 1943, with no end to the war in sight, Congress began to consider how men and women in the service might vote in the upcoming 1944 presidential election. The Green-Lucas Bill sought a standardized ballot and process that allowed overseas military personnel to vote in federal elections. Opponents to the bill argued that states alone had the right to administer elections. In the end, a compromise was reached whereby states could use a federal war ballot if they met certain criteria and chose to do so, or they could continue to use their standard absentee voting process.

For Wisconsin men and women in the military, the process to vote in 1944 began one of two ways. 1111and friends of service people could provide addresses of their loved ones in the military, and the State would mail them ballots. Or the soldier or sailor could request a war ballot from the Secretary of State. George Wanserski, a sailor from Racine, participated in operations in the Aleutian Islands aboard the USS Buckeye. An unused war ballot application from his collection shows how that process began. The state of Wis1consin received over 120,000 such applications for war ballots for the 1944 election.

William Solien, an Edgerton native who served stateside at Camp Wolters, Texas, received ballots for the August 1944 primary election. The affidavit and return envelope provide much information about how Wisconsin service people were to fill out and send in their ballot, as well as how the state officials would handle it.

Even when service people followed the procedure for voting absentee, they worried about whether or not their vote would be counted. Wilbur Berget, a farmer from Gratiot, was serving with the 12th Armored Division in France in November 1944. He wrote in a letter to his parents, “I received my ballot, voted and sent it right back but don’t know if it will get back in time or not. I mailed it on 30 September.” His comment highlights the vast distances that some war ballots had to travel in the midst of a global conflict. Wisconsin received just over 80,000 war ballots for the 1944 general election.

The right of United States military personnel to vote was established in the Civil War, but has changed drastically since then. The changes to the process brought about during World War II demonstrated that state and federal governments understood the importance of making sure all voices were heard and votes counted.

Your ticket for: Evolution of Absentee Voting from the Civil War to WWII