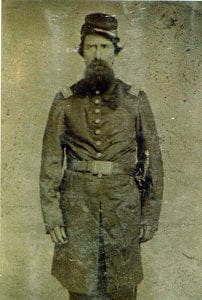 The Wisconsin Veterans Museum focuses on preserving the stories of men and women who serve in the US military. But very often, in the letters, photographs, and objects from those veterans, we can learn much of the families and children who remained home, anxiously awaiting their safe return. Since April is the Month of the Military Child, we are happy to share one of the stories of military children found in our collections.

Augustus Patchin was born in Ohio in 1817. He married Margaret McNish, and the couple moved to Wisconsin sometime before 1850. They settled near Wyocena, began farming, and raised a family. Their first born, Horatio, died in October 1850 at the age of 8, but by 1860, Augustus and Margaret had 4 sons: James, Elbert, Orlo, and John.

When the Civil War began, the 43 year old Augustus chose to enlist into Company D, 10th Wisconsin Infantry Regiment, where he was made a sergeant. In September 1861, he left his family to train at Camp Holton in Milwaukee, and he would not return for more than three years. The eldest surviving son James, just 17 years old, took over the operation of the family farm. A new brother, Herbert, was born in early 1862 while their father was fighting in the Union Army.

As Augustus and the 10th Wisconsin deployed southeast to Kentucky and Tennessee, he wrote regular letters home to his family in Wyocena. In addition to sharing news about his life as a soldier, they asked many questions about the status of things back home, instructed the younger boys to mind their mother, and included advice and encouragement for James about the operation of the family farm. Margaret and James replied with letters that shared family news, short notes from the younger boys, frustrations about running the farm, as well as the increased level of stress in the family caused by Augustus’s continued absence.

Augustus received promotions to 2nd, and then 1st Lieutenant while taking part in fighting at Paint Rock Bridge, Perryville, and Stone’s River. In September 1863, during the Battle of Chickamauga, Patchin was wounded and taken prisoner by the Confederates. He spent months as a prisoner of war, first at Libby Prison and later at Camp Oglethorpe in Georgia before returning to Union lines in 1864. Patchin was mustered out of service in December 1864, at which time he was able to return to his family in Wyocena.

During the three years that Augustus served in the Union Army, his sons who missed their father, played larger and more active roles in the operation of the family farm, and faced incredible worry and stress over their father’s fate following Chickamauga. Herbert did not meet his father until he was almost three years old. James, of the older boys, sacrificed the most while his father was away. In fact, he chose to follow in his father’s footsteps by volunteering for 100 days of service with the 40th Wisconsin Infantry Regiment in May 1864, while Augustus was still being held prisoner in the South. After Augustus returned home, James enlisted into the 47th Wisconsin Infantry Regiment and served the remainder of the war.

The story of the Patchin boys—James, Elbert, Orlo, John, and Herbert—is one example of the many stories of military children preserved at the Wisconsin Veterans Museum. We acknowledge, commemorate, and affirm the role of Wisconsin veterans in America’s military past and present, but we also honor, preserve, and share the sacrifices made by military families and children.

Your ticket for: Month of the Military Child: Augustus Patchin and Family