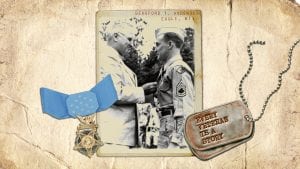 Born July 6, 1922, in Eagle, Wisconsin, Beauford T. Anderson had turned 19 years old by the time the U.S. entered the Second World War. He enlisted in the United States Army on October 8, 1942 and entered service with the newly activated 96th Infantry Division—one of the “draftee divisions” because their ranks were filled with draftees and new recruits following the attacks on Pearl Harbor and the Philippines. Their training began at Camp Adair, Oregon, and later at Camp Beale, California. After nearly two years of training, the 96th transferred to Hawaii to practice amphibious beach landings. After completing their preparation, the 96th sailed into the Southwest Pacific to join the fight in the fall of 1944 at the Battle of Leyte.

When Japan bombed Pearl Harbor and invaded the Philippines in 1941, resecuring the Philippines became a top priority for the U.S.. Japan needed to control the islands because they guarded valuable shipping routes that primarily transported petroleum and rubber into Japan. On March 11, 1942, following the orders of President Roosevelt, General Douglas MacArthur left the Philippines for Australia, since top U.S. officials feared the capture of one of America’s most experienced generals. About a month later, the United States Army Forces in the Far East (USAFFE) surrendered to Japanese forces in the region. MacArthur vowed to return to the Philippines and proclaimed the U.S. had a moral obligation and a strategic necessity to liberate the islands as soon as possible.

Two years later, Roosevelt himself traveled to Hawaii in July 1944 to meet with MacArthur and Admiral Chester Nimitz where the plans to retake the Philippines took shape. Performing reconnaissance, planes took off from aircraft carriers within the U.S. 3rd Fleet, commanded by Admiral William F. Halsey, and made several flights over the islands. Analyzing their aerial reports, Halsey made the recommendation to hit Leyte first, one of the larger Philippine islands.  Leyte’s deep coastal waters would accommodate large transport and supply ships and its gently sloping beaches would provide ample avenues for amphibious assaults. Perhaps most importantly, it offered suitable ground on which airfields could be constructed. Allied air forces would be able to take off from Leyte to attack enemy positions in the region and return to solid ground. Anderson, now a sergeant, and his comrades of the 96th Infantry Division, would be initiated into combat during the Battle of Leyte.

Army Rangers, from the 6th Ranger Battalion, performed pre-landing missions on October 17, 1944. They met little resistance on small islands in the Leyte Gulf and set up navigational lights for the landing crews to follow. The Navy assisted, sending Underwater Demolition Teams in search of mines. With the path clear for assault troops and the 21st Infantry Regiment positioned to guard the approach, on October 20th, a Naval gun bombardment pounded the beaches on Leyte in preparation for the landings. The 96th entered combat in an assault landing where they met little resistance. Later that afternoon, General MacArthur landed on Red Beach and announced the beginning of the liberation of the Philippines to the people of Leyte. The 96th spent the next two months wiping out Japanese resistance on the island, as they stumbled into small engagements while patrolling and searching for enemy positions. During these actions, Anderson earned a Bronze Star. The citation reads, in part, “Anderson crossed fifty yards of terrain under enemy observation and intense fire and rescued two wounded men from the scene of action, removing them to an area of comparative safety where he administered first aid until litter bearers arrived.” By Christmas, Japanese resistance on Leyte neared an end and the 96th spent the next three months mopping-up Japanese defenses, training, and preparing for the next chapter in history, the invasion of Okinawa.

Medal of Honor on Okinawa

On March 27th, 1945, Anderson and the rest of the 96th boarded transport ships and sailed for Okinawa. Their second initiation into combat took place on April 1st, 1945 as they landed at Sunabe, Japan on the right (southernmost) flank of the Tenth Army. Although their landing met no enemy resistance, the 96th ran into heavy fighting on the Kakazu Ridge starting on April 7th. The Kakazu Ridge formed part of the Japanese defenses protecting Shuri, Okinawa’s second largest urban area. Here the advance stopped and for three days Japanese counter attacks crippled the 96th. On the third night on the rocky Kakazu Ridge, Staff Sergeant Anderson ordered his exhausted men into the relative safety of a cave-like tomb. Facing an enemy assault alone to protect their position, Anderson emptied his carbine’s magazine into the enemy, then threw an unexploded Japanese mortar round down at his attackers, allowing him to reload.  He then secured a crate of his own mortars and began arming and throwing them down into the charging Japanese soldiers. After each explosion, Anderson reloaded his carbine, emptied it once more, then threw another mortar round, repeating these actions until the enemy withdrew. In all, he eliminated some 25 enemy soldiers in addition to several machine guns and mortars. He suffered a shrapnel wound in the exchange. He did not see further combat action because of his recovery. Anderson returned state-side and on Memorial Day 1946, President Harry S Truman awarded then Technical Sergeant Anderson with a Congressional Medal of Honor.