On Wisconsin – a New Meaning! 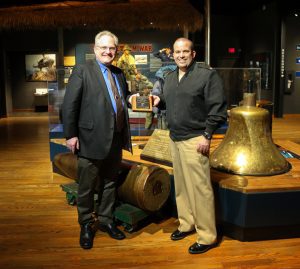 Madison, WI (April 19, 2022) – Yesterday at the Wisconsin Veterans Museum in Madison, the USS Wisconsin Association accepted a piece of the SSBN 827 Wisconsin, to be commissioned USS Wisconsin upon completion, from Rear Admiral (select) Jonathan Rucker on behalf of Governor Tony Evers and the Wisconsin Veterans Museum.
“We are connecting the people of Wisconsin to the future USS Wisconsin and her crews,” said CAPT Jim Harvey, USN (ret), President of USS Wisconsin SSBN 827 Association. “The museum is the most fitting place for this initial piece of USS Wisconsin to be displayed. Here, all people of Wisconsin may visit and understand the rich navy heritage of our state.”
SSBN 827 Wisconsin is a ballistic missile submarine, scheduled to join the fleet in the 2030s as the second boat of the new Columbia (SSBN 826) Class submarines. The submarine will be the third United States Navy vessel named after the Badger State. The previous two were battleships that served collectively during World War I, World War II, Korea, the Cold War, and the Persian Gulf War.
Construction of SSBN 827 Wisconsin began in 2021, and the Navy plans for at least 12 Columbia class submarines by 2042. The SSBN 827 Wisconsin submarine will be commissioned and delivered to the U.S. Navy in the 2030s. The men and women assigned to the commissioned USS Wisconsin SSBN 827 can then proudly say “I’m On Wisconsin!”
Rear Admiral (sel) Rucker, the U.S. Navy’s Program Manager for the COLUMBIA (SSBN 826) Class strategic ballistic missile nuclear-powered submarine program, has been a consistent advocate of the USS Wisconsin SSBN 827 Association. As he provided the casting material to the Association, he noted “It is truly an honor and privilege to be able to recognize and work with the USS Wisconsin Association on our joint efforts to support the future ship and her crew. The ship has started advance construction and we are looking forward to her becoming part of the fleet in the future. The ships named for the state of Wisconsin have a rich heritage and SSBN 827 will continue that legacy.”
Governor Tony Evers, a strong supporter of the USS Wisconsin Association, proclaimed August 27, 2021, as USS Wisconsin Day to acknowledge the state’s critical role in affirming and expanding the strength and capability of the U.S. Navy. “Wisconsin is incredibly proud of our maritime history and ties to the U.S. Navy, from our world-class shipbuilders to the Badger Statue from the first USS Wisconsin that now sits outside my office in the State Capitol,” said Gov. Evers. “This piece of the SSBN 827 Wisconsin being presented to Wisconsin Veteran’s Museum will serve as a critical link between our rich history of support of the US Navy and the strong relationship we’re committed to maintaining for future generations.”
“Wisconsin has been an integral part of our nation’s military history, and I’m thrilled that we continue to be present and accounted for in its future,” said retired U. S.  Navy Captain and Wisconsin’s Secretary of Veteran’s Affairs, Mary Kolar. Secretary Kolar serves as the chief advocate for the more than 342,000 veterans of Wisconsin and their families. “As a native Wisconsinite and retired U.S. Navy Captain, I’m proud the Navy has chosen our state’s name to adorn this new vessel.”
Director of the Wisconsin Veterans Museum Chris Kolakowski is delighted to be a part of the USS Wisconsin Association and honored to have the treasures of the future submarine join the history of the previous ships named USS Wisconsin.
“As the keeper of memories for Wisconsin veterans and the other battleships named USS Wisconsin, the Wisconsin Veterans Museum is proud to help preserve and tell the stories of the newest Navy vessel to bear that proud name and tradition,” said Kolakowski.
When asked about future plans for the association, CAPT Harvey stated that he envisions a strong bond with the crew, introducing them to Wisconsin and USS Wisconsin to Wisconsinites.

About the USS Wisconsin Association
To help support the exceptional men and women who will one day operate and maintain the future nuclear- powered ballistic missile submarine, USS Wisconsin, a group of Navy Veterans and Wisconsinites formed a tax exempt, not-for-profit organization incorporated in the State of Wisconsin in 2021. Their mission is to build and maintain a proud and active relationship with the citizens of Wisconsin and the Blue and Gold crews and families of USS Wisconsin. Their objectives include:

Additional information about the USS Wisconsin SSBN 827 Association can be found on their website.

Your ticket for the: On Wisconsin – a New Meaning!

On Wisconsin – a New Meaning!