On the morning of October 12, 2000, the USS Cole was attacked in Yemen’s Aden harbor by two suicide bombers piloting a small boat loaded with an estimated 700 pounds of explosives. The subsequent blast tore a 40-by-60-foot gash in the side of the guided-missile destroyer, claimed the lives of 17 sailors and wounded 39 others. Included among those killed was Engineman Second Class Marc Nieto of Fond du Lac, Wisconsin.

Following the attack, Osama bin Laden used the action as an effective recruiting tool for his terrorist organization. The action by Al-Qaeda operatives was yet another in a succession of attacks against US interests starting in the early 1990s that culminated in the destruction of 3,000 American lives on 9/11.

Marc Ian Nieto was born on July 25, 1976 in Champaign, Illinois and later moved to Fond du Lac, Wisconsin with his mother Sharon Priepke and his brother Jeff.  Upon graduation from high school, Nieto enlisted in the Navy on November 8, 1994. He was eager to begin, and set his sights on becoming an Engineman. On December 19, 1994, his mother received Marc’s first letter home from Great Lakes Training Center, revealing a new recruit determined to succeed:

Boot Camp isn’t that bad. Finally made it through processing days and finally started boot camp. It all got easier. We get to sleep in till 0500 now. My company commander is actually kind of cool if you do things right, which I do. I’ve got everything down pat but most people are still slacking, so we cycle a lot. That’s all physical training.

Despite some initial academic setbacks, Nieto persevered and graduated from boot camp. He was subsequently assigned to A-School at Great Lakes, and on July 5, 1995 he completed his course training. After a brief stint at Naval Station San Diego for additional training, Nieto was assigned to the newly-constructed USS Cole on November 26, 1995. As a “plank owner” of the Cole, Nieto was understandably proud of his ship, and he quickly settled into the routine of patrol during his first tour of the Middle East. 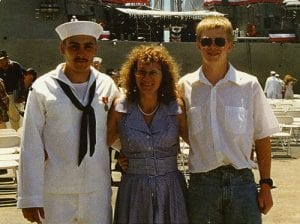 The Cole had been assigned to the USS John C. Stennis Battle Group, and it was during that period where Nieto continued to mature as a crewmember, earning additional qualifications as an engineman and advancing to Petty Officer Second Class. By August 2000, he was on his second tour of the Middle East, having earned the respect of not only his peers, but of his superiors as well. Netio’s supervisor, Senior Chief Lorenson, spoke glowingly of Nieto’s professionalism:

I was Marc’s mentor, and Marc was mine. We learned a lot from each other. Shortly after I met Marc, I knew Marc would always do a great job and not have to be followed after to get the job done correctly. Marc was a Senior Chief’s dream.

Down in the engine rooms, Mooney found a plank owner: Marc Nieto. Like Mooney, Nieto, 24 ,was a Wisconsin native —a body building fanatic and jokester who oversaw the Cole’s air-conditioning and reverse-osmosis water purification systems. Nieto could break down and rebuild almost anything.

Despite his success in the Navy, Nieto was determined to leave the service. He had offered a marriage proposal to a junior shipmate named Jaimie DeGuzman, and had an accepted job offer in hand from GE to work on generators. Neither would happen. Just two weeks before his separation date, Nieto would be killed along with sixteen of his crew mates. 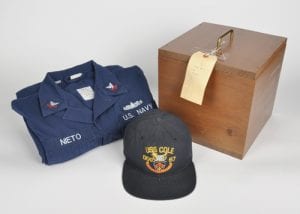 Military affects of Marc I. Nieto, including his coveralls, USS Cole baseball cap, and funerary box. Above the name on the tag is the faint outline of lipstick where the tag was kissed by his mother. V2017.027

Nieto didn’t like the idea of refueling in Aden, Yemen. He had told DeGuzman that it was not a safe port, and that they would want to refuel and get underway as soon as possible. His instincts were correct. Despite being under increased threat, Navy rules of engagement prevented the USS Cole from firing upon the small boat as it neared the ship without authorization.

Moments before the blast, Nieto and his work party of Patrick Roy, Joshua Parlett and Gary “Zeke” Swenchonis moved down the passageway near the galley’s mess line. Their destination was Engine Room 1. It was there that Nieto and four of his shipmates were killed instantly by the blast from the small boat. Quick action from the well-trained crew saved the Cole from sinking and from further loss of life. It would be days before the Navy recovered Petty Officer Nieto’s body, and his true fate revealed to his family.

Petty Officer Nieto’s remains were cremated and a portion were deposited at the site of a magnolia tree planted in honor of the lost USS Cole crewmembers. The remainder were buried at sea by the crew of the USS Cole, when she sailed again after her subsequent repair.

Author’s Note:  In February 2017, Sharon Priepke donated the military effects of Marc Nieto to the Wisconsin Veterans Museum. This donation filled a collections void, and now allows us to more fully tell the story of the War on Terrorism, and the role Wisconsin veterans play in that seemingly never-ending conflict. More importantly, it provides us a way to perpetually honor the memory of Petty Officer Nieto and his shipmates for their sacrifices. 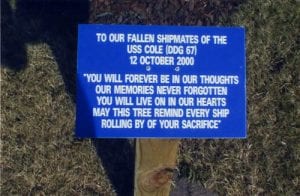 Your ticket for: USS Cole Bombing: The Road to 9/11