This blog post from Gregory Krueger our curator of exhibits, is based on a written account by Lieutenant Colonel Stanley Hollenbeck. Lieutenant Colonel Hollenbeck served with one of the first mobile army surgical hospitals, the 14th Portable Surgical Hospital, within the Buna Campaign, from October 1942 to March 1943.

Graduating from Marquette University’s Medical College in 1936, Dr. Stanley Hollenbeck enjoyed practicing family medicine in Milwaukee, while also serving as an officer within the Army Reserve.  In 1939, he transferred into the Wisconsin National Guard, assigned to the medical detachment of the 105th Cavalry Regiment, where he found the drill activity and horseback riding a pleasant diversion from his private medical practice.  In October, 1940, the 32nd Infantry (Red Arrow) Division, within which his regiment served, got called to active duty.  Dr. Hollenbeck’s regiment, distancing themselves from their horses, transformed into the 126th Field Artillery Regiment and Dr. Hollenbeck received a promotion to major as commanding officer of the medical detachment. 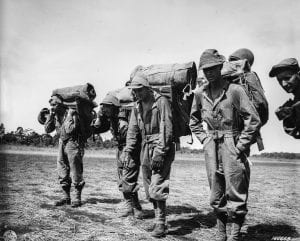 Shortly after Japan attacked Pearl Harbor, Dr. Hollenbeck left his young wife and newborn son in Milwaukee and headed to Louisiana with the 32nd Division for training.  Next, the division transferred to Fort Devens, Massachusetts, to be deployed to the European Theatre.  As the war in the Pacific Theatre expanded, the 32nd transferred to the west coast for deployment, and in May, 1942, arrived in Adelaide, South Australia.  In July, the 32nd built Camp Cable in Queensland, just as the Japanese troops landed on the island of New Guinea, only 90 miles off the coast of Australia.

Trying to strengthen their position in the South Pacific, Japan attempted to invade Port Moresby, capitol of Papau New Guinea, also the largest city in the South Pacific, outside of Australia.  If Japan captured Port Moresby, they could use it as a staging point and airbase from which they could isolate Australia.  Code named Operation Mo by Japan, Allied forces learned of their intent and sent forces to oppose the action.  Japanese ships quickly realized the Allied presence and turned their attention to locating and destroying the Allied ships.  The resulting engagement, the Battle of the Coral Sea, forced Japan to post-pone their attempt to capture Port Moresby.  It also took two Japanese aircraft carriers out of action.  The later proved pivotal during the Battle of Midway, where the Allies had more planes at their disposal to engage the Japanese forces, enabling an Allied victory.  Faced with a reduced naval force, Japan landed troops at Buna, which lies on the opposite side of the island as Port Moresby, attempting to cross New Guinea’s tropical mountain landscape and strike the capitol.  Australian troops stopped the Japanese advance just outside of the city, forcing them back to their beachhead hold at Buna.

Expressing a desire to be sent to New Guinea, so he could fully utilize his medical expertise, Doc Hollenbeck (as his comrades referred to him as) received orders and attached to the 128th Regimental Combat Team (RCT).    In October, he flew to Port Moresby and learned he would take command of the 14th Portable Surgical Hospital (PSH), situated just 30 miles south of the Japanese position at Buna.  Doc Hollenbeck boarded another transport plane, flew over New Guinea’s tropical mountainous terrain, and took command of the hospital.  On November 1st, he made his first ward rounds and noted some 60 patients, primarily fever ridden with Malaria and Dengue, and a few accidental injury cases.

The next few days brought more fever cases and a flurry of C-47 cargo planes, loaded with supplies and troops, preparing to advance on the Japanese.  A fleet of shallow draft sea vessels, known as the “lugger fleet,” supplemented the C-47s, navigating the uncharted reefs and hauling supplies along the coast.  It is not uncommon for this area to receive one hundred inches of rain a year, which made plane transport un-reliable. 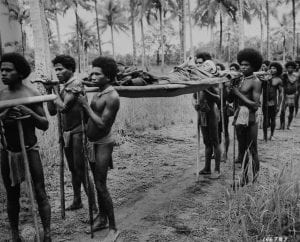 Being a portable hospital situated in a forward position, some patients needed to be transported to a larger hospital, some 15 miles to the rear for proper care.  The lack of roads in the area meant these patients needed to be carried by foot, on litters.  This job fell upon the natives, who worked in teams of eight, carrying one patient at a time.  They preferred to use their own litters, constructed of balsa wood and bamboo, which proved heavier, but provided a much more comfortable trip for the patient than the G.I. litters.  From there, the most serious cases could be flown back to Port Moresby.

Within a week, Doc Hollenbeck himself succumbed to an illness.  New Guinea’s tropical climate brought intense heat, humidity, and a host of disease and disease carrying insects.  Recovering from his own illness, Doc Hollenbeck returned to the ward to find 80 patients in his 25-bed hospital and a temperature of 130 degrees inside the surgical tent. 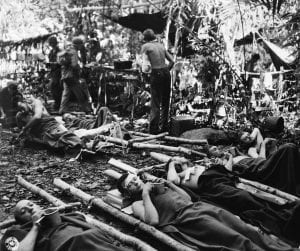 By mid-November, orders came down to pack-up the hospital and transport it north via landing craft personnel (PCP) to Embogo, preparing for action against the Japanese forces at Buna.  Upon arriving, Doc Hollenbeck selected a suitable spot to set-up his hospital, under the cover of tropical scrub brush, near the beach.  After dinner on the 16th, with his tents in place, Doc Hollenbeck decided to take a swim.  Watching a small group of lugger fleet vessels travel up the coast, a swarm of Japanese Zeros appeared overhead, and attacked the vessels.  Abandoning his swim, he retrieved his first aid kit and gave orders for others to follow.  He ran up the beach searching for survivors.  With help in-tow, they located groups of wounded personnel, and carried them back to the hospital.  Doc hurried back to the hospital and prepared for surgery.  At 4:30 the following morning, all patients had finally been treated – some twenty-four servicemen, twenty-eight natives, and four of his own staff perished, another fifty were wounded.  For these actions, the 14th Portable Surgical Hospital received the Distinguished Unit Citation, with several members, including Doc himself, receiving the Silver Star for gallantry. 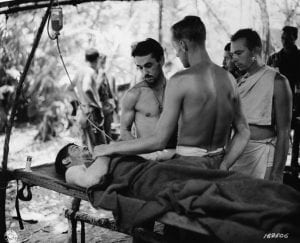 After only four hours of sleep, Doc arose to check on his new patients when another group of Zeros appeared, guns blazing.  They struck some lugger vessels along the beach but did not locate the hospital due to the dense scrub brush concealing the tents.  A couple of Australian troops quickly dug foxholes as the Zeros returned, strafing the jungle but missing the hospital.  Scared, but alive, hospital personnel now knew, the first thing to do upon reaching a new location would be to dig foxholes.

On November 19th, the hospital received orders to pack-up the next morning.  The 128th RCT, continued to push north, towards Buna, and the 14th PSH would follow.  But this time, due to a lack of ships, the hospital would be transported by foot.  Natives and hospital personnel, fifty in all, carried everything thirteen miles to Hariko, just five-hundred yards behind the fighting.

Thanksgiving arrived with little more than bully beef and crackers to eat for dinner.  Food rations and equipment, again hauled by foot, dwindled.  Overhead, planes from both sides dropped bombs and strafed targets, forcing hospital personnel into their foxholes.  Artillery shells exploded nearby.  Meanwhile, blackout orders forced surgeries to be performed by the dim light of lanterns within a pyramidal tent.

Doc notes in his diary, “It is becoming obvious that our troops are having a difficult time trying to move into the well-fortified coconut groves protecting Buna.”  He continues, “…the Japanese, beginning in September, had constructed hundreds of coconut log bunkers reinforced with steel plates and pails and oil drums filled with sand.  It would prove during the campaign that as a shelter, it would withstand almost anything but a direct hit by a heavy artillery shell…”

Despite the hardships, Allied troops continued to push forward, and on December 4th, Doc and his comrades packed-up their hospital and moved closer to the front line.  Battle wounds kept arriving, fever cases kept developing, and the sky buzzed with activity.  One of the field hospitals drew unwanted attention from the Japanese and got bombed, killing nine and wounding another thirty.  Artillery shells continued to fall.  However, Stuart light tanks, constructed partly in Wisconsin, began to arrive, in hopes of breaking through the coconut grove.

On Friday, December 18th, Doc wrote, “Up very early.  Quite a bit of shooting during the night.  Big frontal attack to be made on the coconut grove on Cape Endaiadere (Duropa Plantation area).  Artillery firing began at 6:45 a.m.  Tremendous noise.  The point is taking a terrific shelling.  Seven M-3’s move up followed by Aussie infantry.  Within two hours had reached the Cape.  Casualties soon arrived.” 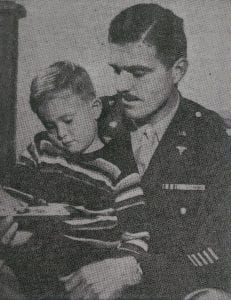 On Christmas Eve, Doc packed up his hospital again to move forward.  “We will be moving up off the beach area to the old Buna airstrip where fighting still going on.”  On Christmas Day he continues, “Fighting is really fierce at the northwest end of the strip and lot of artillery about as shells whistle over us day and night.  Stray bullets also flying about.”

With the help of the tanks, the Allies kept pushing the Japanese into a smaller and smaller area and on December 30th, Doc received orders to move up again. Buna Mission fell on January 2nd and Doc wrote, “Some wounded Japanese prisoners came through our hospital.” But primarily due to the excessive rain, moved the hospital again, this time simply to higher ground.  Patients kept arriving, mostly fever cases, but mopping-up pockets of Japanese resistance meant a few combat injuries came through as well.

Finally, on February 4, 1943 Doc and his hospital personnel loaded their medical gear onto a C-47 cargo plane and left the combat zone.  Returning home to Milwaukee after completing his military service, Doc opened an office and practiced family medicine until he retired in 1981.

Your ticket for: Stories of a M.A.S.H. Dr. in the Buna Campaign